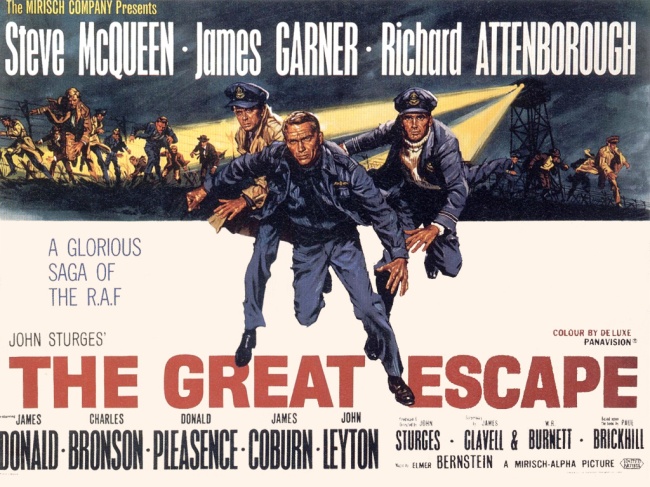 I am not sure if a lot of people in my generation realize how good old movies can actually be. I mean, my favorite movie is the 1966 Western classic “The Good, The Bad and The Ugly”. So I decided to look start watching a few older movies just because a lot of old movies happen to be really good. The reason I chose this movie to watch first and review is because the youtuber Caddicarus said that this movie is fucking great during his review of the video game adaptation of this movie. But what is MY opinion on this classic?
People…the war classic starring Steve McQueen, James Garner, Richard Attenborough, Charles Bronson and many more talented people. The Great Escape.

The story is set during World War II and is about a bunch of soldiers from different parts of The UK and US to escape form a Nazi camp. That is basically it. Not terribly interesting concept, but it is based on real life, so something interesting there has to be in it. Especially with all these great actors. Sure, the concept isn’t the most interesting, but it is so well made/executed that is becomes really fucking interesting.

Characters…they are only interesting because they are so well acted. In my opinion, the best performances honestly comes from Steve McQueen and Charles Bronson. Don’t know why, just think that. Sure, everyone in this movie does great performances, but to me, those two feel like the best ones.

The music in this movie is just fucking excellent. It is a mix of suspenseful bits and very happy and cheerful bits. So yeah, music is good, nothing more to it.

The reception for this movie was really positive. It grossed a whopping 11,7 million dollars. And it had a 4 million dollar budget, which made it the highest grossing film of 1963. Unfortunately I could not find any Roger Ebert opinions on it.

Hmm…good story execution, great characters (thanks to excellent acting), great music. Yeah I got a score for ya. The score for “The Great Escape” is…9,01. Yes I am that picky with scores and yes I think you should watch this classic movie. It is great. And if you can find it on DVD/Blu-ray then I am jealous.

Review of “The Great Escape” is completed.