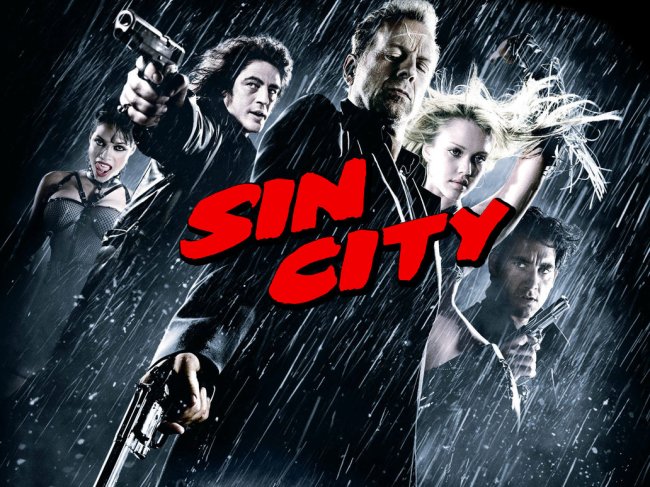 If you are a person that knows me, then you know I am a sort of all-round nerd. Movies, tv, anime, books…comics. Take two of those and you get a certain 2005 movie. And of course I mean comics (or more specifically, graphic novels) and movies. So what happens when you take one of the darkest and most brutal comic series, turn it into a movie and let Robert Rodriguez direct it? You get this interesting 2005 action movie.

Like I pretty much said, the story is based on graphic novels (very graphic, yes puns are allowed here) by Frank Miller who also happens to co-direct this movie. The story follows three different guys and their different situations, all of them involving crime…and a shit-ton of violence. To round up the gang we start with John Hartigan (Bruce Willis), a cop who is sick of the corruption within law enforcement in Basin City (Yes, that is the name of the town), he often refers to himself as old man (which he is) while dealing with a poor heart that could give out at any moment of stress. Next on the list is Marv (Mickey Rourke), a man who is dead set to find the killer of a hooker he slept with (even though he had no fucking clue she was a hooker). This guy is fucking relentless, I mean like wow! Nothing actually stops this guy, they just slow him down. Yeah. And to round up our list of flawed men we have Dwight McCarthy (Clive Owen). A man who had some form of plastic surgery to change his face (his original will be revealed in the sequel coming august this year). He wants to stop this one guy who had hurt and threatened his girlfriend. He also helps out a part of town controlled by, and I am not making this up, prostitutes. There are a lot of things happening in this movie. There is for example parts where Marv fights this cannibal who is too fucking fast for him by the name of Kevin (Elijah Wood). There are a lot of fucked up things happening in this movie. But that is what makes it so interesting plot wise.

The characters in this movie are generally flawed, but only in one way unique to every character. But that is what makes them so damn entertaining to watch. The most entertaining characters were the more psycho characters. Honestly one of the best things go to the character of Jackie Boy (Benicio Del Toro). He is just so fun and cool. He also got a cool voice. But like I said…characters are flawed, but fun as hell.

The music in the movie is perfect for the movie it is in. It is a soundtrack about as dark and haunting as the rest of the movie. That is all.

One good thing to mention about this movie is that is for the most part in black and white. There are colors in it, yes. But they are mostly featured if they either are A: Based on a bodily fluid or B: Bright fucking red. The colors that you’ll see the most in this movie are Red, Yellow and Blue. You will see a few other, but that is not the most usual. But the black and white style combined with the every-now-and-then colors make for a nice detail in the movie.

So based on me thinking the story was good, characters entertaining, music nice, black and white goodness and in generally good action scenes, I will give this movie a 9,25/10. This movie is honestly a lot better than I thought I would think. If you get the chance, buy this lovely neo-noir brutality-fest. It is worth you time/money.

I have sinned by reviwing this (Puns again).