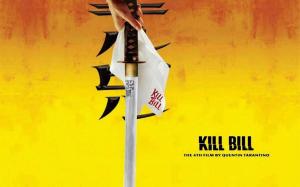 Quentin Tarantino is one of those directors that really came out of nowhere when he first started out and immediately became a big shot in Hollywood. His directorial stardom rocket was his 1992 movie “Reservoir Dogs” and followed in 1994 by his great “Pulp Fiction”. And over the years he has continued making weird, yet good movies. Such as “Django Unchained”. And today we are taking a look at one of his odd movies. A movie about revenge and blood…lots and lots of blood.

This movie follows a woman only known as “The Bride” (Uma Thurman). On her wedding day she and everyone else at the little chapel in Texas gets killed by a band of assassins called “Deadly Viper Assassination Squad”. Thing is…she used to be part of that merry band of assassins. So after being beaten, shot and left for dead, she falls in a coma. While in this coma, her unborn baby of course (unfortunately) dies. A few years later she wakes up in a hospital. She screams from finding out her pregnant belly is gone. When a male nurse named Buck (Michael Bowen) gets paid to let a guy rape her in her supposed “sleep”, she of course kills them both. She steals the keys to Buck’s “Pussy Wagon” and goes with a wheelchair to the car named “Pussy Wagon”. So after sitting in it for circa 13 hours and finally getting her legs working, she starts the car and is off to seek out revenge on the people that tried to kill her. Especially her former boss/lover Bill (David Carradine). Now, this story is good…but does not appeal to me in execution. Sure, there are things in this movie that I really like that relate to the story. For example, there is a scene that gives us the backstory to one of the supporting characters…and that is honestly the best part of the movie. Also, based on promotional posters and DVD covers, this looks like it is gonna be a shit-ton of fighting…but their isn’t that much. Yes, fighting is prominent in the story…but not as much as advertised. Not saying there has to be only fighting, as you may recall from a few of my reviews, I am one for subtlety…but with this weird execution of the story, a little more fighting or something in that direction would have helped a bit. But when there is fighting…it is highly satisfying to watch. Another thing you will notice is that the dialogue is very Tarantino-y…which is a good thing in a Tarantino movie.

The characters I honestly don’t care about. Sure, their dialogue is awesome, but the characters themselves are nothing special…they are pretty meh. I usually like the characters in Tarantino movies…but here I can’t. Maybe it is because they don’t get too much development…they barely get any for that matter. Again, the only part where I care about the character is the animated section that gives the backstory of one of the supporting characters who ends up the main villain in this movie. Also, for a movie called “Kill Bill”, Bill is not very prominent in this movie.

Now time for some praise…the music. The RZA did a fantastic job with it. It is so good that it was nominated for a BAFTA. And what kind of music are we looking at here?  A random mish-mash of musical styles…which is not necessarily a bad thing. In this movie this random mish-mash really works, seriously.

Now like I said, I would have loved a little more fighting in this movie. But the fights in this movie are really well done. Whoever choreographed them deserves an applaud and a raise. Not kidding. Also, like most Tarantino movies, this is very bloody…bloodier than his other movies to be completely honest…which doesn’t rub me the right way. Look, I know Tarantino movies are supposed to be brutal…but having fountains of blood coming from the people you kill is a little overkill (Pun not intended).

Reception for “Kill Bill” was pretty good to say the least. Rotten Tomatoes gave it an 85% rating and have certified it “Fresh”. Metacritic gave it the score 69/100.
Roger Ebert gave this a perfect 4/4 star rating and said this:

“Kill Bill, Volume 1” shows Quentin Tarantino so effortlessly and brilliantly in command of his technique that he reminds me of a virtuoso violinist racing through “Flight of the Bumble Bee” — or maybe an accordion prodigy setting a speed record for “Lady of Spain.” I mean that as a sincere compliment. The movie is not about anything at all except the skill and humor of its making. It’s kind of brilliant.

I have given my different opinions of the different aspects on this movie that I felt like giving. And now here comes my little score. I give “Kill Bill Volume 1” a 7,84/10 and a recommendation to rent it. This is a movie that you can have fun with on the weekend…but not really worth a buy. So that is my opinion on it.