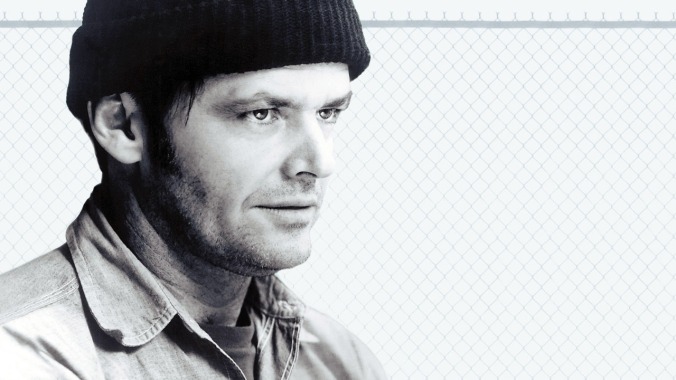 You know those classics people talk about as “The Greatest Movies Ever”? It kind of annoys me when people talk about them like that and they go like “What!? You haven’t seen it yet!? What’s wrong with you!?”. That has happened to me a lot…but the ones being like that are my own parents, mainly my mom. So it is kind of nice when I tell her I have seen a movie that she has nagged on me about for a while. And while that is a slightly unrelated story, it still has a little relation to the movie we are talking about today.

Ladies and gentlemen…”One Flew Over the Cuckoo’s Nest” (What a mouthful).

The story of this movie is that of a dream of freedom. To clarify; R.P. McMurphy (Jack Nicholson) is sent from prison to a mental hospital (the loony bin for you less serious people). There he meets one of the most evil(ish) nurses of all time in the form of Nurse Mildred Ratched (Louise Fletcher). He isn’t too happy with her. So he starts to rebel against her in every way he possibly can. But he is not all alone. In there he meets a bunch of colorful figures such as Martini (Danny DeVito), Cheswick (Sydney Lassick), Taber (Christopher Lloyd) and the stuttering Billy Bibbit (Brad Dourif). Together they (often kind of indirectly) rebel against Nurse Ratched and the mental hospital. And that is really the story in a nutshell. It is kind of an interesting concept that not only sounds good on paper, but also translates really well onto the screen. the story is incredibly well executed and is just really intriguing. Based on the book by Ken Kesey (which I read almost a year ago), I think it captures the feeling of the book perfectly. It is just all around interesting.

The characters are honestly the strongest part of the movie. Let’s start with the three sort of “most prominent” characters. And first in that line is R.P. McMurphy himself. He is this guy who is both a rebel and a good person at the same time. While he may seems like this street-smart guy, he also has a lot of heart and wants the best for his fellow inmates. He is exactly what I want from a perfect character. Multi layered. He is smart, kind, rebellious and got the perfect amount of craziness á la Jack Nicholson to keep him fun and interesting. Next up is Nurse Ratched. She might seem like a kind nurse at first, but after a while you will see that she is not the most kind nurse ever…trust me. She is the perfect villain (Yeah, I said it). She and R.P. are kind of the two different sides of a coin. One is a good hearted but crazy guy and the other one is a not very good hearted but completely level-headed woman. And the final character I wanna mention is the character of Billy Bibbit (Yes, the stuttering guy). Sure, he might seem completely weird at first, but after a while you notice he is actually not that crazy…he just stutters. That is all I wanna mention when it comes to characters…the yare interesting and incredibly well-acted.

The music…great. I don’t know who composed the original tracks, but he/she gets a major pat on the back from me. Then there are a few licensed tracks that while nice, I don’t really care about. But the combination in the movie is honestly great. Nothing else to say.

It is difficult for me to talk about the camera work in this movie since I watched it recorded on an old VHS tape. But from what I could gather it was well done. It was a little blurry, so it was a little difficult to tell. This movie also gets a little bit of bonus points from me for having Jack Nicholson in it…kind of like how I give a few movies bonus points for Edward Norton…yeah.

Reception for this movie was pretty damn good. The movie has a 96% positive rating and a “Fresh” certification on Rotten Tomatoes. Metacritic has a score of 79/100 for it. Roger Ebert gave this movie his perfect score of 4/4 stars and put it on his “Great Movies list”. He also said this.

Miloš Forman’s One Flew Over the Cuckoo’s Nest is a film so good in so many of its parts that there’s a temptation to forgive it when it goes wrong. But it does go wrong, insisting on making larger points than its story really should carry, so that at the end, the human qualities of the characters get lost in the significance of it all. And yet there are those moments of brilliance.

I have thrown my opinions of a few different aspects on this movie and I’m ready to hand out a score. My final score for “One Flew Over the Cuckoo’s Nest” is a 9,8/10 and I tell you that you have to buy it! Now! This is an incredibly well directed, well-acted and just generally amazing movie. Also the “SEAL OF APPROVAL!” makes a triumphant return!

“One Flew Over the Cuckoo’s Nest” is at last reviewed.