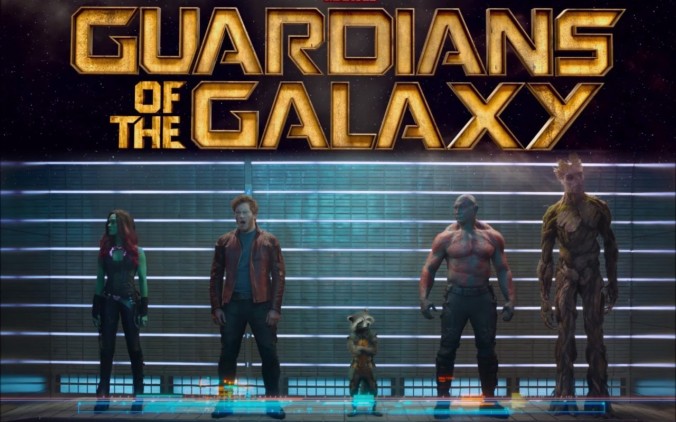 Everybody loves Marvel (except for DC fanboys who won’t admit they do like Marvel). Personally I am a bit of a fence sitter when it comes to the comic giants. It all depends on the comic/movie/cartoon/series itself. I like Iron Man…but I also like Batman. I like Superman…but I like Thor as well. But that is not the point right now. The point is the fact that Marvel made a movie…about a comic series popular among Marvel nerds…but no one else know who they are. What is this movie? Will I like it? Those are questions we will get answers for today!

Guys and girls…”Guardians of the Galaxy”.

Peter Quill (Chris Pratt) is a bounty hunter. 26 years ago he was abducted by a bunch of aliens led by the bounty hunter Yondu Udonta (Michael Rooker). But now as I said, he is a bounty hunter himself. One day he is on the hunt for this mysterious orb…thingy. When he finds it he is attacked by a man named Korath (Djimon Hounsou). Korath is there to get this orb for his boss, Ronan the Accuser (Lee Pace). After a quick, but not too graceful escape, Peter (Also called Star-Lord in the movie) makes it to a planet to trade in the orb for cash. But soon he gets hunted down by three very odd people for various reasons. Gamora (Zoe Saldana), who wants the orb. Rocket Raccoon (Bradley Cooper) and his companion, the waling tree, Groot (Vin Diesel) wants Peter because he has a bounty on his head. Soon they all end up in jail where they meet the very dangerous Drax the Destroyer (Dave Bautista). Soon they all escape to A. Sell the orb to get a load of cash…and B. Kill Ronan (Mainly Drax). Now this might seem like an odd and not very detailed plot for a movie…and you would be right if I didn’t have my rule…the execution. And I have to say the execution for “Guardians of the Galaxy” is fucking amazing. It is somewhat simple, but fun. They have a straight narrative in this movie and never veers off track. Also…the story is so weird, yet so amazing.

I honestly think the characters are the highlight of this movie. They are amazing! Not only very well-acted, but also incredibly well-written. Let’s start off with the main star(lord) of the movie…Peter Quill. Not only is he the most prominent character in the movie, but he is also the fleshed out. He not only gets a well-written (And somewhat heartbreaking) backstory, but he also got the most personality. Next up is Gamora, she got a great backstory (which you’ll find out about later in the movie) that could actually make it’s own, pretty interesting movie. She is a badass (like Zoe Saldana…oh wait). Next up is Drax. His wife and daughter got killed by Ronan…but that is as far as it goes. They never touch too much on the subject, which kind of makes the character a little underwhelming. It might also be because Dave Bautista is a wrestler…not an actor. Next is Groot, the walking tree. He is a walking tree voiced by Vin Diesel…there is not much. Yet he is a great character. He is kind hearted, badass and only speaks in three words: “I am Groot”. So usually Rocket will have to translate what he said for the others (He and Groot are old buddies). You guys are probably wondering why I finish with the fucking Raccoon…but that is the reason. He is a gun toting, trash talking raccoon voiced by Bradley Cooper. He stole the movie. The only character in the movie I had the biggest problem with in the movie was the villain, Ronan. He wasn’t really that interesting. “Avengers” at least had Loki. And “Iron Man” had Obadiah Stane…but Ronan is not interesting in any way. I admit, Lee Pace did a good job…but the character itself wasn’t that interesting.

The music in this movie is fucking amazing. It is as most modern sci-fi/action movies. In that sense I mean it is a mix of original orchestral songs and licensed tracks…and I fucking love that. The most known track is “Hooked on a feeling” which was featured in both the trailer and this movie. But in general…I loved it.

This movie got some of the best visual effects that I have scene in any sci-fi movie ever. I especially loved the effects on both Groot and Rocket…they looked amazing. Also, the camera work, oh my god it was really good! James Gunn really shows how to make a good looking movie. Also, this is the funniest movie I have ever seen (without it being dumb-dumb comedy). Not only funniest Marvel movie, but funniest in general. I laughed so much during this movie.

“Guardians of the Galaxy” is one of those movies that got really good reception. On Rotten Tomatoes it has a 92% positive rating with a “Fresh” certification. On metacritic it has a score of 76/100. On imdb.com it got a score of 8,6/10 and is (At the time of this review) ranked #52 on the Top 250 list.

I said some things. Some good things, and one slightly less good thing. But that slightly less good thing doesn’t bring the movie down that much. Time to throw out my final score for the movie! “Guardians of the Galaxy” gets a 9,97/10. It is a fun, action-y, hilarious sci-fi adventure with good acting, great effects and a lot of heart. This movie gets the “SEAL OF APPROVAL!”.

“Guardians of the Galaxy” is now reviewed.

This will probably end up my favorite movie of the year (Unless “Interstellar” somehow beats it).