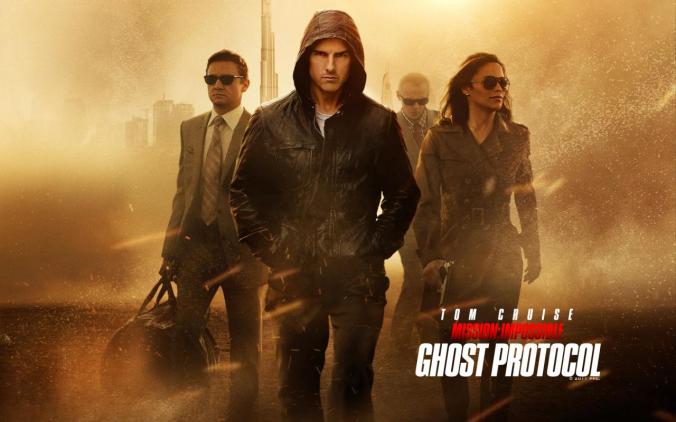 Action movies is something I think most people can agree that they like. Sure, everyone will not like every action movie but they will like something at least. Like me, I am not a fan of a whole bunch of action films (such as “Conan the Barbarian” and “Last Action Hero”, both ironically starring Arnold). I like action movies that have a little bit of mind (“Terminator 2”, “The Matrix”, etc.). Sure, I like a few dumb ones as well, but I don’t want them to be too dumb. And then I heard about this one franchise starring Tom Cruise called “Mission: Impossible” a gew years back. And to be honest, I never watched the first three movie… but we’re reviewing the 4th one anyway!

This movie is as far as I get it following the events of the third movie. IMF Agent Ethan Hunt (Tom Cruise) is in jail in Moscow. After he escapes said jail with the help from Agents Jane Carter (Paula Patton) and Benji Dunn (Simon Pegg) they do a job trying to get some files on where a certain man called “Cobalt” (Michael Nyqvist) is. But after Hunt leaves the building (The Kremlin to be exact) it gets blown to pieces. And the russians put the blame on IMF. So a thing called “Ghost Protocol” (Roll credits) gets initiated and basically disbands IMF. So now Ethan and his friends have to stop Cobalt without any help at all. Oh wait, they get some help. And that help comes in the form in analyst William Brandt (Jeremy Renner). But as far as extra toys and guns from the organization… fuck that. I know my explanation of the story was pretty bad… but the story in general was overall very interesting. I was intrigued by it and it never felt dull or boring at all. The only parts of the story where I have to give a little less of a score is because of my sheer stupidity to watch this before all the other movies. Yes, I felt a little lost with a few details, but they were pretty minor. Overall, good story.

I have to say that I really enjoyed the characters in this movie. They were well-written and well-acted. Sure, these were not really Oscar contenders, but they were definitely getting the job done. I also like the chemistry between our main group of people (Cruise, Renner, Patton, Pegg). They had really good chemistry and it was really fun hearing them banter every now and then. My favorite character was honestly Brandt (Renner). He was this guy who was insecure about all the gadgets and the job they were doing. He was really fun… yet deep. I was also happily surprised with how good Michael Nyqvist did the role of the bad guy in the movie. I really enjoyed him. Good job Nyqvist!

The music was really exciting and really worked to sell both the action and locations of this movie. It was really great to listen to. Also… I love the Mission: Impossible theme. It really kicks ass.

The camera work in this movie is stunning. Brad Bird really knew what he was doing behind that camera. It was done in a way where the landscape shots became really beautiful! But the main thing about the camera work that I loved more than anything was that we actually got to see the action happening and not just get some bullshit shaky-cam! THANK YOU, BRAD BIRD!

The reception this movie got was good. This is the highest ranked Mission: Impossilbe movie on all major movie sites. On Rotten Tomatoes it has a 93% positive rating with a “Fresh” certification. On Metacritic it has a score of 73/100. Roger Ebert gave this movie 3,5/4 stars and saying the film