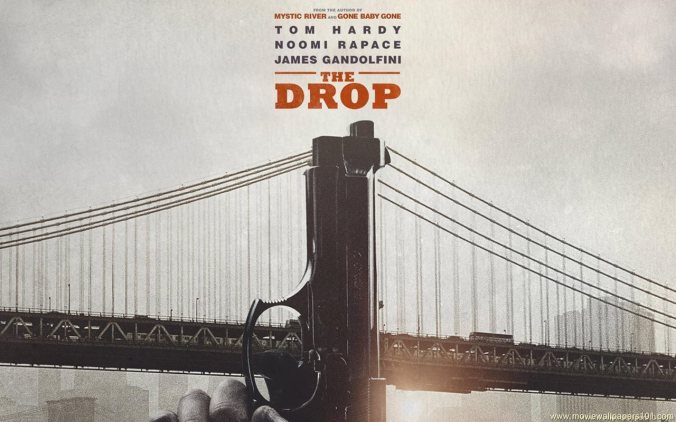 I am a big sucker for a good crime story. If something (movie/tv/games) with a crime story looks interesting to me. So then I found out that there was a movie that was a crime story written by Dennis Lehane, author of books like “Shutter Island” and “Mystic River”. So of course I got pretty excited. Now I have finally seen it and I am ready to talk about it.

Ladies and gents… “The Drop”.

“The Drop” is about Bob Saginowski (Tom Hardy) who works at a bar with his cousin Marv (James Gandolfini, R.I.P). But this isn’t a regular bar, oh no. It is a so called “Drop bar” that sort of funnels cash around to different mobsters. But one night the place gets robbed and shit starts going downhill. I thought the plot was great. The reason I didn’t say too much is because it is best experienced. It is a really good plot with a few twists here and there. There is also a sort of sub-plot on the side with Bob finding a dog in a trashcan and befriending a woman named Nadia (Noomi Rapace). And that works too, I liked it. The only problem I have with the plot is that the main stuff takes a while to get started. Not bringing the movie down too much, but it still tick’s me off a little.

The characters in this movie are well-written and spectacularly acted. Bob for instance may seem like a calm person who wouldn’t hurt a fly, but believe me when I say he got tons and tons of rage built up inside of him that you don’t wanna expeience. Tom Hardy portrays him pefectly. James Gandolfini is also great as this guy, Marv. I mean… he is James Gandolfini. Noomi Rapace is also great as this woman who Hardy’s character befriends. The characters are all great.

Even though I cannot for the life of me find the composer for the OST of the movie I can still say that I really like it. It reminds me in a lot of ways of the soundtracks by Trent Reznor & Atticus Ross, cold and slow. They all help build a suspenseful atmosphere in the movie that stayed with me throughout. The choices for the licensed tracks were good too.

Even though I am a big fan of Dennis Lehane I was a little worried going into the movie. Last time I saw a movie with a screenplay by an acclaimed author was when Cormac McCarthy (No Country For Old Men) wrote the screenplay for the terrible “The Counselor”. Thankfully the screenplay and overall writing in the movie is terrific. I am going to be completely honest, everytime someone opened their mouth I was very interested. Everything they said was great. This movie was also terrifically shot. This movie is directed by Michaël R. Roskam who made the Oscar nominated foreign film “Bullhead”. Every shot looks great, the framing is great, everything relating to the direction and camera work in this movie was great.

“The Drop” got a good story, great characters and acting, a really good soundtrack, great camera work and a great script but takes a little while to get going. Now for my final score. My final score for “The Drop” is an 8,98/10. I highly recommend it and I do think it is worth buying.

Review of “The Drop” is now completed.