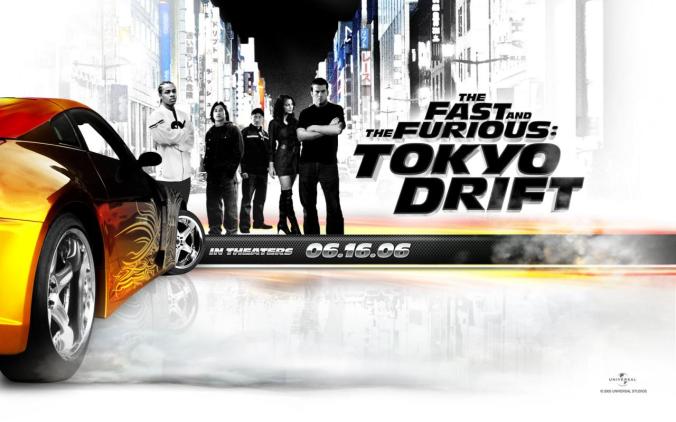 With “The Fast and the Furious” month just keeps going, time to review the third part of the series. No delay, let’s do it!

Guys and gals… “The Fast and the Furious: Tokyo Drift”.

So for the third movie they decided to drop all of the main characters for a new guy. In this movie we follow high school student Sean Boswell (Lucas Black) who gets sent to Japan to live with his dad (Brian Goodman) after Sean crashes a car at a construction site (Whoops?). And of course since this is an “F&F” movie he gets into even more racing shenanigans. But this time it is through the ways of drift racing! Simple plot for a simple movie. What I liked about it is that unlike “2 Fast 2 Furious” the plot of this movie isn’t trying to be more than it actually is. In that movie we had a racing movie trying to be a cool undercover cop movie and I feel like that detracted from the overall quality. But in “Tokyo Drift” we have a plot that is simple and knows what it is. The only things about it that tries to be slightly above the whole racing movie thing is that they bring up a little Yakuza (Sidenote: For those of you who don’t know, the Yakuza is the Japanese mafia) in the latter half of the movie. But they didn’t exploit that to look deeper than it actually is and therfore did not ruin the plot. Yes, the plot is not my favorite dumb-dumb plot ever, but I did enjoy it more than “2 Fast 2 Stupid Title”.

Once again we have characters that are kinda fun but still not that great… kind of like “2 Fast 2 Stupid Title”. The only difference is that these characters seem less cartoonish. On the plus side, no annoying Tyrese Gibson. On the negative side, no Ludacris. I can however say that Lucas Black was pretty good in the movie. Now I have never considered him a terrific actor… mainly because I have only seen him in “NCIS: New Orleans” up to this point. But he was pretty good and played his character well.

This is the first movie in the series to actually feature an original score. Of course there are a lot of licensed tracks heavily based in the hip-hop/rap department. And while they were even better fitted into the movie than in “2 Fast 2 Stupid Title”, they were nothing special. What I care about is the original score of the movie… that was actually really good! It was done by the always terrific Brian Tyler who never disappoints. We also got one track in the original score by motherfuckin’ Slash! Hell yes! And that track was fucking badass! *Ahem* Sorry… I liked the music in the movie, it fit.

This is the movie that introduced Justin Lin to the franchise and thank god it happened. Not that the other directors were bad, it’s just that Lin was a good choice. He makes his movie look smooth, slick and cool. This might be the most well-directed of the movies so far (Sidenote: By “so far” I mean out of the movies I have seen). It is more well-directed in my opinion. And the driving scenes are as fun as before… nothing more to it. Also, if you have not seen it yet, there is a pretty cool cameo in the end that I will not spoil.

This was not a very well-received movie. On Rotten Tomatoes it has a 37% positive rating. On Metacritic it has a score of 46/100. Roger Ebert gave this one, like the two previous movie, 3/4 stars. And on imdb.com it has a score of 5,9/10.

“The Fast and the Furious: Tokyo Drift” is jsut as stupid as the previous movies but still understands that the plot doesn’t need as many “layers” unlike the previous movie. It also has a decent performance from Lucas Black, a really good soundtrack, slick direction and fun races. Time for my final score. *Jeff drifts in* Holy shit… nice drift, Jeff! You got the envelope? Thank you… now drift away! *Jeff drifts away* My final score for “The Fast and the Furious: Tokyo Drift” is an 8,52/10. I actually think it is worth buying.

“The Fast and the Furious: Tokyo Drift” is reviewed.