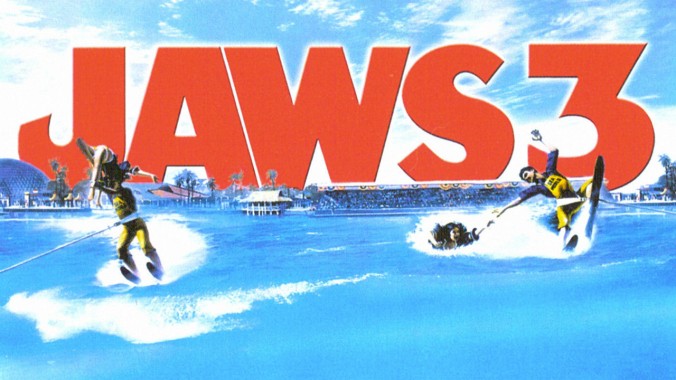 Sorry that it’s taken me so long to get to this entry, the only reason I got is because I have been hesitant to do it. I’ve been like “No, I don’t wanna watch it! NO!” but then I was like “Come on, Markus… you promised your followers”. So I took a deep breath, groaned for a bit and finally sat down to continue my series of “Jaws” reviews.

So in this movie a shark breaks into Sea World and it’s up to Mike Brody (Dennis Quaid) and Sean Brody (John Putch) to stop it. That’s right, this time it is up to the sons of our beloved Police Chief to try to stop the shark. I’m not gonna lie, I actually liked the idea of a shark breaking into Sea World and causing mayhem. Problem is however that the execution for the plot is pretty bad. And by bad I mean fucking terrible. There is no suspense or tension AT ALL in the movie, it’s all gone. And the writing in the movie wasn’t very good either, so that just made the storytelling even worse. And the fact that the plot can get over-the-top and unintentionally hilarious doesn’t make it any better.

The characters are uninteresting. That’s it, uninteresting. And it doesn’t help that the actors are mediocre at best in the movie. I mean… I guess Dennis Quaid’s fine, but most other actors are straight up not good. I think a bit of it comes from the lackluster script as well as the actors.

For this movie Alan Parker took over the reins for the score. So how was it? BLAUAUAUAUauaaauuuuuauuuuu. Yep, it’s bad. It’s bloated, it’s ridiculous and it doesn’t know how to build any tension whatsoever. Even “Jaws 2” knew how to build a little bit of suspense with it’s score. This score has no idea what the fuck suspense or tension is. This score is terrible.

The directing in this movie is not good… at all. The camera starts, the camera films, the camera stops. Nothing great about it. And this is also the only movie that director Joe Alves has ever directed (Gee, I wonder why). Also, I mentioned in the beginning how this movie was marketed as “Jaws 3-D”. Yeah, and it is very noticeable that they wanted it to be 3-D. But even if you watch a 3-D movie in 2-D it should blend in seamlessly… but “Jaws 3” does not do that. The 3-D effects are very noticeable and they are some of the worst I have ever seen. I’m not gonna lie, I even laughed at the efects becaus they were so bad. Especially at one part near the end (spoilers, even though you shouldn’t watch this piece of shit) where the shark is heading straight for a glass window and breaks it. It all looks awful and it is pretty hilarious. My god, this movie has nothing going for it, huh?

This movie has not been well-received at all. It is so terribly received that it doesn’t exist on Metacritic or on Roger Ebert’s website. Anyway, on Rotten Tomatoes it has an 11% positive rating (Ouch). And on imdb.com it has a score of 3,5/10.

Guys… “Jaws 3-Dick” is fucking awful. It has a terrible plot, no good characters, terrible music, bad directing, awful 3-D and is almost impossible to watch. Time for my final score. *Cries in a corner for 5 minutes*. My final score for “Jaws 3” is a 1,77/10. I seriously think we should BURN THAT SHIT!

I don’t know why I am doing this for you guys.