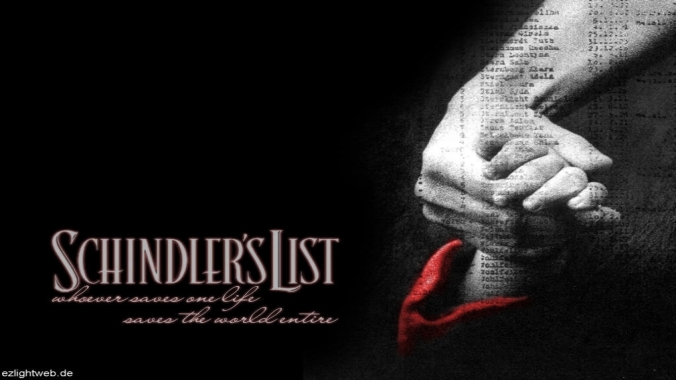 Ladies and gentlemen, for the final day of summer I present to you… “Schindler’s List”.

In this movie we follow industrialist and ladies man Oskar Schindler (Liam Neeson) who starts getting concerned about his Jewish after seeing what the nazis do to them. And I’m not gonna lie, it was quite riveting. I was engaged and invested in this story throughout the entire three hour runtime. Rarely has a movie that long been able to keep my attention and be this interesting. The story is dark, beautiful and even a little bit scary. The shit that happened back then, the dark side of humanity, that is what scares me. But it also showed the kindness and courage people might show during these harsh times and that is what makes this plot so fantastic.

When the characters start feeling like real people in these terrible times, that is when you know you got some great characters. A lot of it comes from the excellent writing, but most of it comes from the fantastic performances. This is definitely the best I have ever seen Liam Neeson, he really disappeared into this man and he was no longer Liam Neeson to me, he was Oskar Schindler. Ben Kingsley also did a phenomenal job as Schindler’s Jewish bookkeeper. And Ralph Fiennes (Pronounced Ray Fines, by the way) was pretty amazing as well, playing a major douchebag who at a lot of times is conflicted about what he’s doing. Every actor in the movie was pretty great and no single performance in the movie stood out as “bad” or even “mediocre”.

Considering that this is a Steven Spielberg movie, one should not be surprised that the score for the movie was done by John Williams. Not that it’s a bad thing at all, Williams is a fantastic composer. Anyway, Williams did it again. He managed to compose a score that made you feel all of the emotions. Especially sadness, a lot of it thanks to violinist Itzhak Perlman helping out in a lot of tracks. The score is really beautiful and perfectly complemented the movie.

Like I said, this movie was directed by the one and only Steven Spielberg. And as always, the movie was incredibly well-directed. A lot of it can also be attributed to the fantastic cinematography by Janusz Kaminski. The movie looks beautiful. Some might call the whole black and white style a gimmick, but I call it beautiful art. I would say that it really improved upon the movie and did a lot to make it even better than it already was. I do also appreciate the selective coloring throughout the movie. If you’ve seen the movie you know what I am talking about. Here is also a fun fact: Kaminski has also provided the cinematography for some other Spielberg movies such as “Saving Private Ryan”, “Minority Report” and “Catch Me if You Can”.

This movie has gotten pretty much universal acclaim (the hilarious part of that statement is that Universal is the studio behind it). On Rotten Tomatoes it has a 96% positive rating (100% if you go by “Top Critics” only) and a “Fresh” certification. On Metacritic it has a score of 93/100. Roger Ebert gave the movie 4/4 stars and put it on his “Great Movies” list. And on imdb.com it has a score of 8,9/10 and is ranked #6 on the “Top 250” list. The movie also won 7 Oscars (Wow) in the categories of Best picture, Best Director, Best Adapted Screenplay, Best Cinematography, Best Set Decoration, Best Film Editing and Best Original Score. The movie was also nominated for an additional 5 Oscars in the categories of Best Actor (Neeson), Best Supproting Actor (Fiennes), Best costume design, Best sound and Best makeup.

Wow, 1993 was a great year for Steven Spielberg. Both this and “Jurassic Park”.