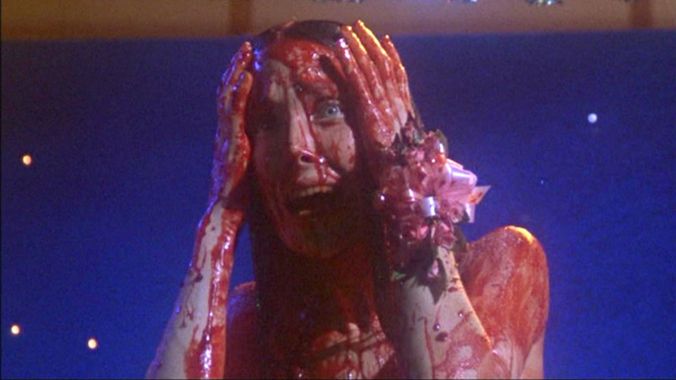 Hello guys, welcome to “The Month of Spooks”! The time here in October where I review some horror movies. I know that it might be a little bit late to start with that shit in the late half of October, but I am an idiot so that is why we get it now. But hey, better late than ever. Anyway, the movie of today was suggested by Peggy over at the blog peggyatthemovies.com which I highly recommend if you want high quality movie (and TV) stuff. Now that we have gotten that little plug out of the way, let’s move on to the review.

Ladies and gentlemen, I would really like you to meet… “Carrie”.

Carrie White (Sissy Spacek) is a very shy and quiet girl who does not have the best of lives. First off, her mom (Piper Laurie) is a real fire & brimstone type of religious nut who really tries to dominate and have full control over Carrie’s life. Second, the other girls at her school bully her to no end and they are some of the worst people I have ever seen on screen. Seriously, those girls and Tommy from “The Butterfly Effect” are my picks for the biggest pieces of shit in cinematic history. Anyway, when Carrie has all of these problems she discovers that she has telekinesis. And from that we get a very interesting and pretty well presented, if a little sloppy plot. I’m not gonna say that it’s terrifying, but it’s definitely creepy and has an uneasy atmosphere. However there are moments of the story that I would call sloppy and it takes away a little from it. So I would say the plot is pretty good if a bit sloppy.

The characters like I said are some of the biggest pieces of shit ever. Except for Carrie, she is a very sweet girl who I just wanna hug and then tell her “It’s gonna be okay”. And Sissy Spacek gives a great performance as this shy, scared and damaged girl. I would say that everybody gave great performances, even young John Travolta (Yep, he’s in this movie).

The score for the movie was composed by Pino Donaggio and I think it was pretty freaking great. It is beautiful, creepy and is very well-composed. It is heavily based in stringed instruments and piano which is really fun to hear, especially since it turned out to be as great as it is.

This movie was directed by Brian De Palma and he did a pretty fantastic job with the directing. The shots look great and there are a lot of gorgeous long takes and tracking shots that were just pure eye candy. I do think that no one could have done it better than De Palma, this is really his movie. And without any major spoilers for the people who might not have seen this, I have to say that the finale is one of the most bittersweet but still relieving finales ever. Is there some kind of comeuppance given to the assholes? Yeah and it is both amazing and kind of “Well that’s kind of terrible”. But it was still glorious and the very ending actually scared me in a way. You who have seen it know what the hell I am talking about.

This is a very well-received movie. On Rotten Tomatoes it has a 92% positive rating and a “Fresh” certification. On Metacritic it doesn’t even exist. Roger Ebert gave the movie 3,5/4 stars. And on imdb.com it got a score of 7,4/10. “Carrie” was also nominated for 2 Oscars in the categories of Best Actress (Spacek) and Best Supporting Actress (Piper Laurie).

“Carrie” is a very creepy horror movie with a very uneasy atmosphere with a good but still a little sloppy plot, great acting, great music, fantastic directing and an awesome final act. Time for my final score. BOO! My final score for “Carrie” is an 8,74/10. I do think it’s still worth buying.

My review of “Carrie” is now completed.

“The Month of Spooks” is on.