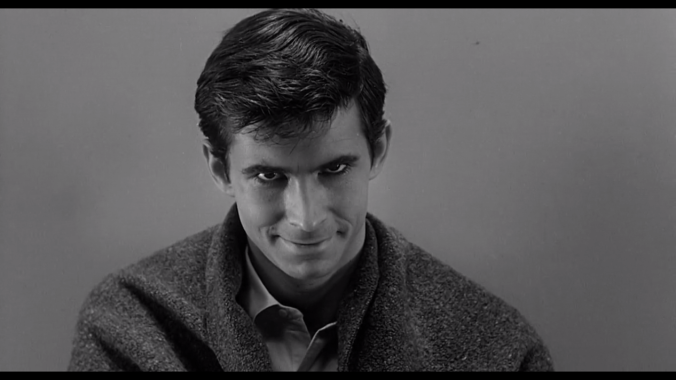 Hello and welcome to the next review in “The Month of Spooks”. And for this one we go back in time a little bit. To a time where blood and gore wasn’t as commonplace or even accepted. To a time where most horror movies were kind of not good. So is this supposed “classic” good? Let’s have a look.

Ladies and gentlemen, I may or may not be a… “Psycho”.

A young secretary named Marion Crane (Janet Leigh, R.I.P) steals 40 000 dollars from her boss’ client and goes on the run. One night she pulls into a remote motel run by young man named Norman Bates (Anthony Perkins, R.I.P). And from that some weird stuff happens. And you most likely know what kind of weird stuff based on you probably having seen this movie or by simply looking at the title of the movie. And I’m not gonna lie, despite the predictable idea of the story I was still caught off guard. The story is very suspenseful and has a pretty damn great end twist which I will not spoil if you somehow have not seen this movie. Let’s just say that it’s weird, comes out of nowhere and is pretty great. I would say that the plot overall for this movie is pretty great.

The characters in the movie are pretty well rounded for 1960. Come on, let’s face it… while a lot of movies had good or even great acting back then, the characters were often pretty flat. But here we get some interesting and pretty rounded characters. And of course the acting is pretty damn great. And let’s only really focus on who the movie is mainly about, Norman Bates. Anthony Perkins is amazing in the role as this character with a lot of mannerisms and quirks that might be difficult to do without making it forced or terrible. But Perkins nails it and does a fantastic job in this movie. Everybody is good, but Perkins is amazing.

The score for “Psycho” was provided by Bernard Herrmann who also did the score for “Taxi Driver”. And just like in that movie, the score for this movie is pretty damn great and perfectly captures the feeling of the movie. The fright, the terror and the suspense. All of those things are captured in the heavily string-based score. And it is all terrific!

Spot the Hitchcock! That’s right, this movie was directed by Alfred Hitchcock which means two things. First off, try to spot him in his mandatory cameo. And secondly, this movie looks fantastic with some amazing angles which only he could achieve… I think. To be honest I have not really seen anything other from him than “The Birds” and I think I was 12 when I saw that. But still, I think this movie looks fantastic and is more well directed than a lot of modern movies.

This has been praised as one of the greatest movies ever if you didn’t already know that. On Rotten Tomatoes it has a score of 96% positive rating and a “Fresh” certification. On Metacritic it doesn’t even exist (yet they have the shitty remake on there). Roger Ebert gave the movie 4/4 stars and has it on his “Great Movies” list. And on imdb.com it has a score of 8,6/10 and is ranked #35 on the “Top 250” list. The movie was also nominated for 4 Oscars in the categories of Best Supproting Actress (Leigh), Best Director, Best Cinematography and Best Set Decoration.

“Psycho” is a movie that in my opinion has really earned it’s legendary reputation as a great movie. It has a great and suspenseful plot, brilliant acting, fantastic music and fantastic directing. Time for my final score. *COUGH*. My final score for “Psycho” is a 9,84/10. It definitely gets the “SEAL OF APPROVAL!”.

My review of “Psycho” is now completed.

We all go a little mad sometimes…