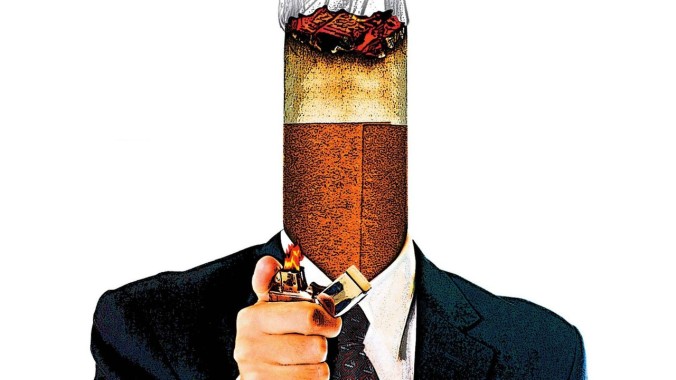 I have a very mixed feelings about corporations and the people who work for them. Doing all kinds of dirty and terrible businesses while having some skilled and equally slimy face to the outside world who will distract people from the bad shit. And while I don’t condone that type of work, I have to admit that it’s pretty fucking clever.

Ladies and gentlemen… “Thank You For Smoking”.

The movie follows Nick Naylor (Aaron Eckhart) who is the spokesperson for Big Tobacco. Nick is in a little bit of a dilemma as he is trying to speak for cigarettes and make people actually keep buying them while at the same time trying to be a bit of a role model for his young son, Joey (Cameron Bright). That’s right, this movie is centered on a man saying smoking is cool and good for you, the usual villain thing… and it aboslutely works perfectly. No, I don’t mean that I wanna go out right now and buy a pack o’ smokes, I am saying that it is a damn clever way of delivering the story. I mean, the moral at the end of the movie (no spoilers) is actually the smartest way of handling this type of thing. And since this is meant to be a satirical comedy, is it funny? Yes it is funny, I would even say that it is pretty fucking hilarious, it made me laugh a lot. And since the the movie managed to deliver a smart & interesting story while also making me laugh, I really have to give it some major cred.

The characters in this movie are colorful, well rounded and incredibly entertaining. And you know what makes them even better? The actors. Aaron Eckhart is aboslutely fantastic in the role as Nick Naylor. He is perfectly on that line of slimy public figure while still remaining as likable as one can be. And you actually root for him in his struggle to balance his job and the relationship to his son. And like I said, Eckhart is terrific in the role. William H. Macy plays the senator who Naylor is constantly butting heads with and he is also great in his role. Cmaeron Bright is really good in the role as Naylor’s son. And then we have J.K. Simmons as Naylor’s boss and of course he knocked it out of the park because he’s J.K. Simmons. There are so many moe names I could mention, but I don’t feel like going through the entire list. But I do really think every actor did a great job in the movie.

What I like about the soundtrack is that it’s kind of a mixed back of styles. No, not in the “Cowboy Bebop” sense where you will basically hear any and all genres possible, but rahter to get a decent mix of stuff. The original score for the movie was composed by Rolfe Kent and it is great, kind of Henry Mancini-esque in it’s style. Then we have a lot of licensed tracks relating back to smoking in some way and they all perfectly fit into the movie when they are used.

This movie was directed by Jason Reitman (Sidenote: Son of Ivan Reitman who directed “Ghostbusters”). And you can really notice that it is one of Reitman’s movies since it has his style that would be noticeable in his movies. Okay, to be honest I have only seen “Juno” prior to this, so I don’t have too much to go on, but according to people who have seen more of his movies they have said that he has a very unique style. Very snappy, very stylish but still very conventional. And I guess that is kind of what I really like about his directing style. I can also say that the movie features some fantastic writing (also done by Reitman) that both made me laugh out loud and think “Yes, this shit is true”. What I am trying to say is that it’s both funny and thought provoking. Fun fact: this movie is based on the book of the same name by Christopher Buckley… just wanted to throw that out there.

This movie has been well received. Om Rotten Tomatoes it has an 86% positive rating and a “Fresh” certification. On Metacritic it has a score of 71/100. Roger Ebert gave the movie 3,5/4 stars. And on imdb.com it has a score of 7,6/10.

“Thank You For Smoking” is a very clever satire of not only cigarette companies, but of the American conglomerate in general. It has a smart & well-crafted story, great characters & acting, great music, really good directing, great writing and it is really hilarious. Time for my final score. *Huff puff*. My final score for “Thank You For Smoking” is a 9,90/10. It most definitely gets the “SEAL OF APPROVAL!”.

My review of “Thank You For Smoking” is now completed.

You wanna get better at rhetorics? Listen to Nick Naylor.