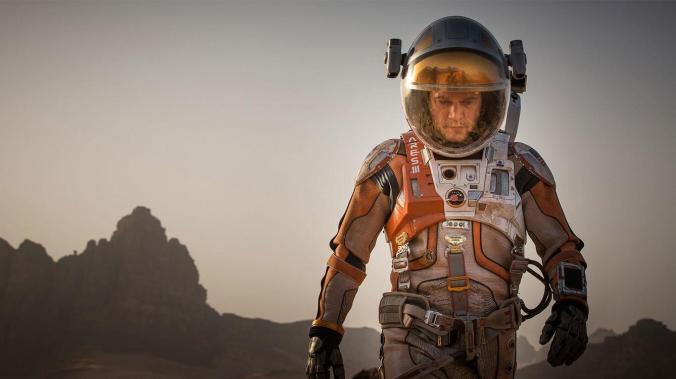 With the amount of sci-fi movies being released every year, there aren’t always that many that stay more grounded and realistic. Sure, sci-fi/action movies are great, but sometimes you need something more realistic to balance everything out. So here we go.

Ladies and gentlemen, this man is… “The Martian”.

Mark Watney (Matt Damon) is an astronaut/botanist. And as we meet him, he wakes up on Mars after his team left him during a storm. So now he have to try to survive all alone, using only his wits and his smarts and a very limited supply of resources. All this while the people over at NASA try to find a way to get him back. And based on the plot there is only one conclusion that we all can draw; this is “Apollo 13” meets “Cast Away”. And I’m not the only one who have said this, a lot of people have come to the same conclusion. Now here is the important question: Is the plot of “The Martian” any good? Yeah… it is. First off, you care for this guy so much and you really want him to make it back home. Secondly, it is just intriguing to see what he will do next to try to survive on this big-ass desert. And the side-plot on planet earth with NASA trying to get him back is really good as well, surprisingly so. All of it was in fact really good.

The character of Mark Watney is one of the most likable bastards I have ever gotten to know in a movie. Most people in this type of situation would be sad, down and all like “I’m gonna die!”. So instead of Watney being like that, he is one of the most optimistic people ever. And Matt Damon gives a fantastic performance as this man stuck on Mars. Chiwetel Ejiofor plays the man who’s pretty much in charge on earth with the hole “Get him back” plot, and he is pretty damn great in the role. And the people who were part of Watney’s team who we get to know are all great too. Also, Jeff Daniels, how great it is to see you in a great role! Then we have a bunch of other actors as well and they are all great in their respective roles.

The original score of “The Martian” was composed by Harry Gregson-Williams who I personally am a big fan of. And once again he delivered a great original score. A lot of it is typical sci-fi stuff, but it’s at the same time big, emotional and surprisingly thought-provoking. And all those tracks were used very well. There were also a good amount of licensed tracks in the movie and they all fit well into the spots where they were used. I was especially happy when they used “Starman” by David Bowie because not only do I think it’s a great song, but it also worked for the tone of this movie.

This movie was directed by Ridley Scott and that was one of the things I really had high hopes for going into this movie. Because even if the movies he makes aren’t that great, they are all very well directed. And “The Martian” is not exception, it is a terrifically directed movie with some beautiful and steady shots. And the visual effects are all fantastic, all of them looking very real. What I was surprised by however was that this movie was pretty hilarious with a lot of great jokes in there. Now don’t get me wrong, this movie isn’t all shits and giggles, because there this is generally speaking a very serious movie. For example: early on in the movie we get to see Matt Damon pulling some shrapnel out of himself without any anesthesia and also fix the wound… that is pure suspense and drama and it’s one of the reasons why this movie is as good as it is.

“The Martian” is a sci-fi movie with a great plot, great hcaracters & acting, a fantastic soundtrack, great directing, great suspense and some surprisingly good comedy. Time for my final score. SPAAAAACE! My final score for “The Martian” is a 9,84/10. It most definitely gets the “SEAL OF APPROVAL!”.

My review of “The Martian” is now completed.

I’m gonna have to science the shit out of this