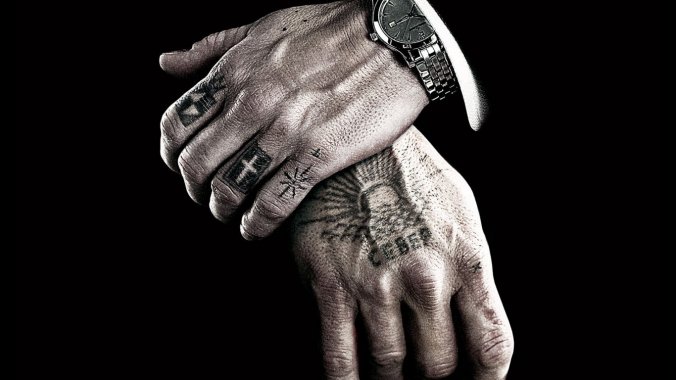 In Soviet Russia, movies direct you.

After a Russian teenager in London dies while giving birth, a midwife named Anna (Naomi Watts) finds a journal in the young girl’s bag that helps give her clues to everything leading up to this. And this makes Anna run into a Russian mob family who might’ve had something to do with it. So we get to see Anna trying to find out exactly what happened while we also follow a man named Nikolai (Viggo Mortensen) who’s kind of the driver/fixer for this mob family as he tries to do his job for them while also forming a little bit of a connection with Anna. And I won’t really say anything else about the plot itself because that would kind of be going into spoilers. I can however say that I found the plot infinitely interesting and captivating. The events that unfold before the viewer’s eyes are all perfectly handled and helps to tell a dramatic and surprisingly psychological plot. I’m not saying it’s trying to mindfuck you, but it definitely uses a bit more brain than most crime stories. Never did I find myself bored during this movie, my eyes were pretty much glued to the screen the entire time.

The characters in this movie… it’s difficult to call any of them 100% good guys, even Anna who is pretty much the main character has some shades of grey to her. But even though none of them are really perfect/good, I can at least understand where they’re coming from, I fully understand their motivations and thoughts throughout. Naomi Watts is great as Anna, really nothing else I can say about it… she’s great. However, I can definitely speak more about Viggo Mortensen as Nikolai. He is absolutely fantastic in this movie. It’s also kind of a daring performance for him since he is an American playing a Russian. But I honestly had no problem with it because of a few reasons. One of the reasons is that he perfectly nailed the accent, second was that he actually spoke a bit of Russian in the movie and third is because his performance did everything right as well. I was especially impressed after what he did/went through in a scene that’s late in the movie (no spoilers). Vincent Cassel plays a man who works together with Nikolai and he was great as well. Then we also have Armin Mueller-Stahl as the boss of the mob family and he was absolutely terrific in his role as too. Everybody in the movie did a great job, really.

This movie was directed by David Cronenberg who also made the excellent “A History of Violence” (Sidenote: Also starring Viggo Mortensen). And he did a terrific job with the directing of this movie. It’s very smooth, it has a lot of long(ish) takes that let’s you see everything that happens and even notice details that are in the background. The movie is also very violent, so any person who hates violence in movies or can’t watch a lot of blood on screen might wanna stay away. I will warn you already, this movie is Rated R but borders heavily on NC-17. And while that doesn’t ruin any part of the movie for me, I am just saying it as a warning for people who might not be able to take that stuff.

This movie has been very well received. On Rotten Tomatoes it has an 89% positive rating and a “Fresh” certification. On Metacritic it has a score of 82/100. Roger Ebert gave the movie 4/4 stars. And on imdb.com it has a score of 7,7/10. The movie was also nominated for 1 Oscar in the category of Best Actor (Mortensen).

My review of “Eastern Promises” is now completed.

In Soviet Russia, movie review you.