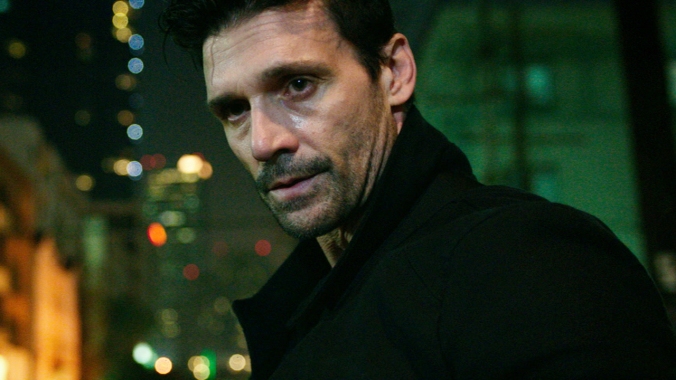 So now it’s time to review the second part in this franchise. Because I reviewed the first one a few days ago and I thought “Fuck it, let’s not postpone this damn thing too much”. So let’s just get into it and see what kind of quality this one has.

Ladies and gents… “The Purge: Anarchy”.

So this time we don’t follow Ethan Hawke and his family, oh no. This time we follow some other people. To be more specific, a mother (Carmen Ejogo) and her daughter (Zoë Soul), a man (Zach Gilford) and his wife (Kiele Sanchez), and then we have a lone wolf badass (Frank Grillo). And these people accidentally come together in the middle of the shitstorm that is “The Purge” and then have to try to survive together through the twelve hour hell that the United States government has issued. Not gonna lie, this is kind of what I wanted to see. This is closer to what I wanted from the whole “ALL crime is legal for one day” premise that the first movie set up but wasted by making a home-invasion thriller. Not to say that the plot here is that great, because it’s not. But I would say that I enjoyed it a little bit more to see where it all went even though there wasn’t too much of a plot to hand on to.

The characters are dull and I didn’t really care for any of them… except for one. And yes, your first guess was correct, it’s Frank Grillo I cared about… mostly because I like Frank Grillo. He’s a  likable badass who is also kind of a jerk… sort of like his character in “Captain America: The Winter Soldier”. His performance was good and he was really badass. All other actors, they were fine in their roles, nothing to write home about. But the characters, like I said, are pretty dull. If they died, I probably wouldn’t care so much. But I will say this, Michael K. Williams has a smaller role in this movie, and whenever he was on screen it was really enjoyable.

The score for the movie was composed by Nathan Whitehead, the same dude who composed the music for the first one. And while this score isn’t that great, it’s actually kind of an improvement over the first… yeah, go figure. But I just thought it was a bit more well composed and actually had a few tracks that made me go “Huh… that wasn’t too bad”. It also worked well for the movie in itself, even though nothing here is mind blowing or fantastic or even great. It’s fine, what else can I say?

This movie was written and directed by the same guy as the first movie, James DeMonaco. And while the writing is still pretty meh and pretty dumb, his directing was pretty good. The shots look pretty good and I never wanted to slam my head in a wall because of poor direction. The movie also has some action scenes and I’m not gonna lie, I thought they were pretty fun. There was never any real suspense in the movie, I was never worried for anyone, but the action bits were fun and entertaining. There is one scene near the end that I thought was pretty cool that I think would be pretty great in a video game. I’d say that this movie is more of an action-thriller rather than a horror movie. Sure, there are a few jumpscares, but I would never consider this a horror movie. The first “Purge” is a horror movie, “The Purge: Anarchy” is an action-thriller. But yeah… it was pretty fun.

“The Purge: Anarchy” is really, really dumb. But it’s also kind of fun. The plot is more enjoyable, Frank Grillo is really good in it, the music is fine, the directing is pretty decent and the action is entertaining/pretty good. Yeah, I’d say that this is a slight improvement over the first movie. Time for my final score. ANARCHY! My final score for “The Purge: Anarchy” is a 6,55/10. So I’d say it’s worth a rental.

My review of “The Purge: Anarchy” is now completed.

Can we please get #FrankGrilloForDeathstroke trending?