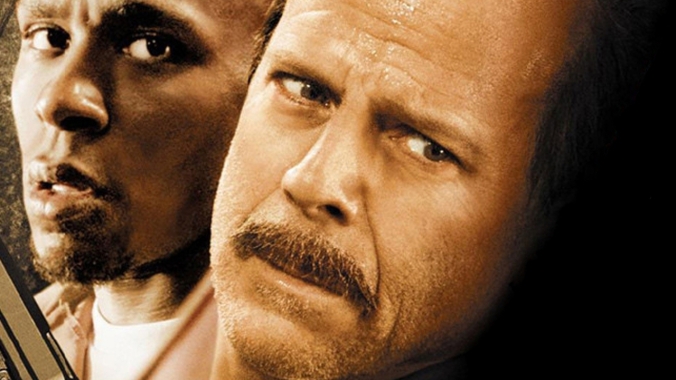 Cops. Men and women who have sworn to uphold the law. While they have gotten some shit for bad actions by certain individuals within the profession, I feel like we shouldn’t blame the police force in it’s entirety. While there are some bad apples out there, I’d argue that most cops are good. They exist to keep us safe.

Alcoholic cop Jack Mosley (Bruce Willis) has bee ntasked with escorting a man named Eddie Bunker (Yasiin Bey, also known as Mos Def) to a court hearing so he can testify as a witness. However that won’t be as easy as Jack would hope because of some people who don’t want Eddie to testify at the hearing. And from this we get a surprisingly solid plot that I found pretty interesting. Now, the execution isn’t necessarily the best. I was never fully engaged in the story, and there were a couple moments that didn’t really make sense to me. Now, I’m not saying that everything has to make 100% sense, but this was one of those situations where the movie expected me to suspend my disbelief. Sure, I could do it at a few points in the movie, but most times it wasn’t too bad. But there’s a moment/scene in particular that just made no sense at all. So overall the plot is good, but it’s still not great. It doesn’t do anything particularly original and that weird moment I talked about briefly did bug me, but it’s still a better plot than I thought it would be.

The characters in this movie, while not the most fleshed out, are still interesting and pretty entertaining to watch. Bruce Willis is really good as our hero, giving a surprisingly vulnerable performance. That’s right, Bruce Willis is actually ACTING in this movie… something we don’t see too much these days. Yasiin Bey (known at the time as Mos Def) plays Eddie the witness, and he does a surprisingly solid job. Putting a rapper in an acting role can go horribly bad, but this turned out really well. David Morse plays a cop/old friend of Willis’ character, and he is great (like he is in most things). David Zayas is also really good. So yeah, all the actors in this movie did really well.

The music was composed by Klaus Badelt and he did a really good job with it. It’s really well composed, dramatic, and emotional. It’s also tense at times and really helps elevate certain scenes.

This movie was directed by Richard Donner and I think he did a great job. It’s very well shot and the action scenes in this movie are really well handled. But they aren’t the typical big/explosive action scenes, but smaller and a bit more realistic, which I liked. There’s also a fair amount of handheld camerawork in the movie. For the most part it is just fine, but there is one moment pretty early on where it’s just awful. That said, it’s just that one moment and it’s over really quickly. But I did think it was worth noting.

“16 Blocks” is a surprisingly good action-drama. It has a good plot, okay characters, really good performances, really good music, and really good directing. However it is quite flawed since there are moments in the plot that do not make any sense, and also a little because of that quick shaky-cam moment. Time for my final score. *Bang*. My final score for “16 Blocks” is an 8,62/10. So while it’s quite flawed, I’d still say that it’s worth buying.

My review of “16 Blocks” is now completed.