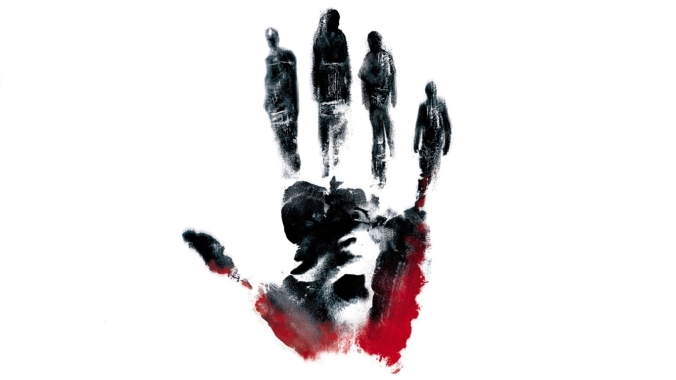 Who doesn’t love a good mystery? I don’t mean in real life, because murder is fucking horrible, but I mean in movies and television shows. There’s something about murder mysteries that I just love. Even when they’re not that great and kind of formulaic (like most crime procedurals), I still enjoy watching them.

It was a dark and stormy night… what, I’m not trying to be funny, it was actually dark and stormy. Anyway, a group of strangers find themselves stranded at a motel in the middle of nowhere during this weird storm. And soon they start getting killed off one by one. Basically it’s “And then there were none” in a shitty Nevada motel. But that is a formula that has proven successful in many different movies and shows, so maybe it could work here too. And while there are a lot of conveniences in this plot, it is still overall an eerie and suspenseful mystery. I found myself invested in this plot, trying to figure out who the hell was guilty. There are also a few twists in this movie that I will not spoil, but let me just say that they will polarize audiences. I for one thought they were for the most part pretty good. It’s really hard to explain why some of them worked so well without spoiling the twists, but I honestly thought that they did work pretty well. The only twist I’m a bit iffy on is the final one. It’s not awful and doesn’t detract too much from the plot, but it did feel a bit odd. But overall this is an interesting mystery that has some flaws.

The characters in this movie are pretty shallow and not the most interesting. I didn’t really hate them, but I also didn’t love any of them… they were okay. But while the characters weren’t the most compelling, the performances were great. I wouldn’t exactly call any bad, all of them were good, so I’m just gonna list some of the actors. John Cusack, Ray Liotta, John C. McGinley, Amanda Peet, John Hawkes, Clea DuVall, William Lee Scott, Jake Busey, and Alfred Molina.

The score for the movie was composed by Alan Silvestri and it was great. The stuff he composed for this movie is eerie, tense, and just overall very well composed. It really helped elevate some of the scenes throughout.

This movie was directed by James Mangold and yes, I missed that this was a Mangold movie during the “Mangoldathon” and I feel a little bit of shame over that. Still, better late than never. Anyway, I thought he did a really good job here. The shots look great and he manages to create a good amount of suspense with his direction. The biggest problem with the directing is that there’s one obvious (and kind of dumb) jumpscare in the movie, but it doesn’t bring the movie down for me. It’s quick moment, over in a second, nothing to be angry about. But overall his directing here is really good. Really, this is a damn pretty movie.

“Identity” is a really interesting albeit flawed thriller. It features a good plot, okay characters, really good performances, great music, and great directing. The flaws come from some notable conveniences and the final twist being a bit odd, and the characters aren’t really the most compelling. Time for my final score. *Clears throat*. My final score for “Identity” is an 8,97/10. It’s flawed, but I’d still say that it’s worth buying.

My review of “Identity” is now completed.

I’m so happy that this movie gave me an excuse to write “It was a dark and stormy night”… always wanted to do that.