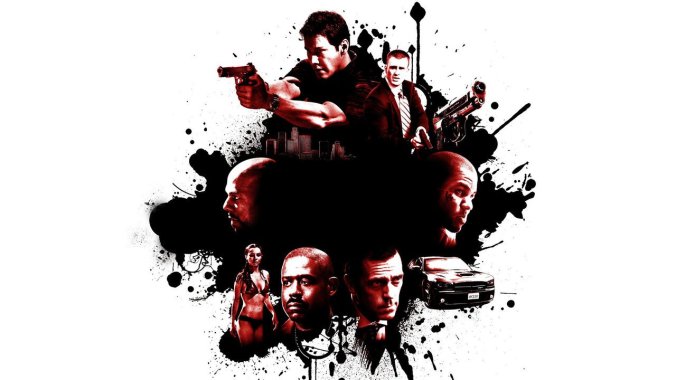 I’m all for the police. They’re needed to uphold the law. But then we have some cases of corruption within the department, which makes some people blame the police in it’s entirety, which I think is unfair. Just because you find one spoiled apple in a bunch, do you throw away all of them? If you are, then you’re wasting a bunch of perfectly good apples, you fucking dick. Point is, don’t blame everyone… just the individual.

Detective Tom Ludlow (Keanu Reeves) isn’t really what you’d call a good cop, as his methods for taking bad guys down are usually a bit… extreme. And when an old partner of his gets killed, he goes on a quest to find the assholes who did it. And to do this he teams up with a young and less corrupt cop named Diskant (Chris Evans). So now we have a gritty cop story about corruption and death and cover-ups and revenge and such. And is this plot good? Eh. I see a lot of potential in this story, and at times it grasps for the greatness… but doesn’t quite reach it. It feels like they just kind of skimmed the surface of this plot, not quite getting there. Maybe it’s the runtime/pacing? It’s only about an hour and fortyfive minutes long, and it never really takes a break to develop the plot or let moments actually simmer and have any effect. I could definitely see this as a show on HBO or Netflix where it could get some time to develop. But overall it is… fine.

The characters here are for the most part just a bunch of unlikable assholes… so it’s hard to get invested when you don’t really like any of them. They’re not even really that interesting, they’re just… unlikable assholes. Keanu Reeves in this… I usually love Keanu, but here he is one of those previously mentioned unlikable assholes. Though I’ll say this, he gives a really good performance here. Forest Whitaker plays Keanu’s boss in this, and he’s probably one of the more likable characters in this, even if he is a bit of a shady dick. His performance is great though. Chris Evans in this plays one of the less shady cops in this, and he’s also not a total dick, so that’s great. And he gives a really good performance here. Hugh Laurie plays the captain of internal affairs in this, and he is great here. Jay Mohr (first time he’s mentioned on the blog… weird) plays one of Keanu’s colleagues, and he’s also kind of a dick… and he gives a good performance. Amaury Nolasco plays another one of Keanu’s colleagues, and he’s also a dick in this… and he gives a pretty good performance. Then there’s a bunch of good supporting performances in the movie too, including from Naomie Harris, Common, Terry Crews, John Corbett, and more.

The score for the movie was composed by Graeme Revell and it was pretty good. It was serious and gritty, fitting the urban style of the movie. Really, there isn’t a lot to say about it. It’s not very original, and it’s not very memorable. It’s just some okay music that worked pretty well for the movie.

This movie was directed by Daivd Ayer and I think he did a pretty good job. While the movie isn’t visually unique, it does actually look good. His direction has (in lack of a better word) grit to it, really capturing the dangerous and unpredictable feel of this world. And the action scenes in this movie are good. They’re badass, brutal, and pretty exciting. Definitely the highlight(s) of the movie.

Despite the great idea it presents, “Street Kings” is quite shallow and becomes just… fine. It has an okay plot, meh characters, great performances, okay music, and really good directing. As previously mentioned, my flaws with it comes from the plot not being great and the characters being unlikable. Time for my final score. *Ahem*. My final score for “Street Kings” is a 6,98/10. So while flawed, it’s worth renting.

My review of “Street Kings” is now completed.

Who’s coming with me to reboot this as a show?