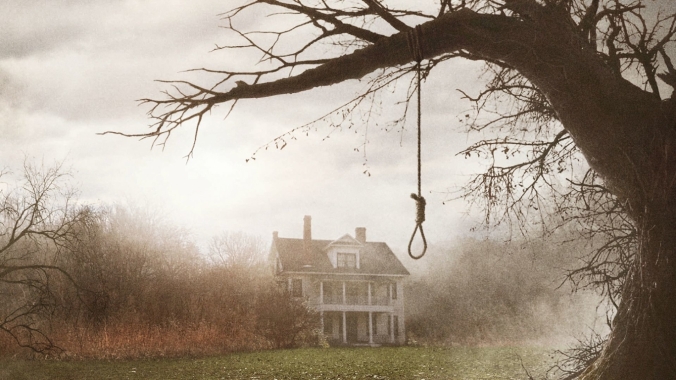 And the Month of Spooks marches on! So what type of horrible horror is on the table tonight? Another haunting? Cool.

Ladies and gentlemen… “The Conjuring”.

Ed (Patrick Wilson) and Lorraine (Vera Farmiga) are a couple who happen to be paranormal investigators. And one day they get called in to try to help a family who claim to be haunted by some dark/evil presence. So now we have our haunted family/house/person/thing story. And I use that quick description of it because there’s a lot of familiar elements to it. A good amount of the beats throughout we know from various other movies, so it doesn’t bring a lot new to the table. That said, it does these things quite well. The plot here is creepy and tense, and I was invested in it from start to finish. Not saying that it’s perfect, but it’s definitely good.

For the most part I found myself invested in the characters here. They were interesting and decently likable. Patrick Wilson plays Ed Warren, one of the two who go to investigate this creepy situation. He’s a bit reluctant to do it based on something that happened in the past, and he’s given a good amount of development in this movie. And Wilson is great in the movie. Vera Farmiga plays Lorraine Warren, wife of Ed, and fellow investigator. She’s a fairly well developed character as well, which includes the same past situation as her husband. I also like her because she’s determined and decently tough without coming off like a thundering dumbass. They make her strong but vulnerable. And Farmiga is great in the role. Lili Taylor plays Carolyn, the mother of the family that is having haunting problems. She goes through some interesting stuff in this movie that makes her a pretty interesting character. And Taylor is great in the role. Then we have Ron Livingston as Roger, the father of the family. And while there’s nothing inherently wrong with Livingston’s performance (it’s actually quite good), I found his character kind of lackluster. He’s supposed to be an important part of this, but his character feels underdeveloped compared to everyone else. And to not drag out this bit too much: All the kids in this movie do a good job. There, this is a well acted movie. Moving on!

The score for the movie was composed by Joseph Bishara and it was great. It was droning, creepy, eerie, chilling, and just overall worked quite well for the movie, often elevating the suspense of various scenes. There were also a couple of licensed tracks used in the movie that worked pretty well in their respective scenes.

This movie was directed by James Wan (making his second appearance this Month of Spooks) and I thought he did a great job. He does a lot with very little, building a lot of suspense with very few things. Really, the suspense/tension really builds throughout the movie, and any scares that pop up feel earned. I also want to mention that this movie is rated R. “How is that interesting?” I hear you ask. Let me explain. Cursing? Almost none. Sex/Nudity? Mildly implied, but never shown. Blood/gore? Minimal. This is rated R based purely on how scary it is… not gonna lie, that is pretty fucking cool.

“The Conjuring” is a pretty damn good horror movie. It has a really good plot, good characters, great performances, great music, and great direction. My only flaws with it (which are fairly minor) are that the beats of the movie feel very familiar, and Ron Livingston’s character feeling underdeveloped. Time for my final score. *BOO!*. My final score for “The Conjuring” is a 9,01/10. So while flawed, I’d say that it is definitely worth buying.

My review of “The Conjuring” is now completed.

There were several occurrences of 70s lingo in this and it makes me so happy.