Hello there, ladies and gents of the internet. I have once again joined in on a blogathon. Just like the last couple of blogathons that I’ve been part of, this one is hosted by Kristina from Speakeasy and Ruth from Silver Screenings. And in this blogathon the participants were asked to talk about food in film. It took me a while to choose something to write about, but I managed to figure it out and signed on. Skip ahead a couple of months and now we’re here! So let’s stop with these delays and get into the tasty num nums!

So as you could gather from the start of this post, I have chosen to talk about the food culture of J.K. Rowling’s wizarding world by talking about the “Harry Potter” movies. Now, for the cave dwellers reading this post, I guess I should explain what the hell a “Harry Potter” is. In 1997, J.K. Rowling released a novel titled “Harry Potter and the Philosopher’s Stone” (there is no alternative title, you silly Americans), and it was a HUGE hit. It got sequels and movies started getting made. And in 2001 we saw the release of “The Philosopher’s Stone”, directed by Chris Columbus, starring Daniel Radcliffe, Rupert Grint, Emma Watson, Richard Harris, and Maggie Smith (among many others). This was also a huge hit, getting a whole bunch of sequels, video games, and a spin-off franchise. Alright, no more backstory for you. Now, I chose this because not only do I adore this series, but also because it’s filled with food, which makes it perfect for this blogathon… so let’s enter the great hall and have a look at the buffet!

One of the most interesting things about the culinary culture of this world is that it’s very… British. Bacon, sausages, toast… it looks a lot like your typical British breakfast table, as demonstrated by Ron, his friends, and the table they’re sitting at.

Really, for the most part it is pretty average. And by average, I mean for you typical Brit. The food they eat there isn’t exactly the healthiest, but I guess it’s still good food. Good, very ordinary food. Like these chicken legs that you find Ron chomping on.

Though, when eating, be sure to keep an eye out for rogue John Cleeses…

Again, the food for the most part seems to be what we have in our world. No “dragon spleen casserole” or “Chupacabra soup”… just normal food. Even the adorably weird Luna asks for normal stuff.

Anything for you, Luna.

Now, while most dinner/breakfast/lunch items are normal things, it’s when you start looking beside them, looking at beverages and candy and such that you start finding unique things. So let’s talk about some of them. 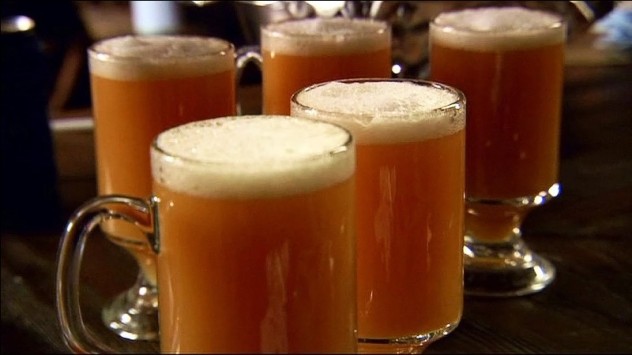 The first beverage we’re introduced to in this show (aside from tea, damn Brits) is pumpkin juice. It’s also the primary beverage for our beloved Hogwarts students, not even water comes near it in terms of abundance. So what is pumpkin juice? It’s right there in the name, it’s juice… made from pumpkin. Not sure what that would taste, as I have never actually tried pumpkin anything. So if you consume pumpkin (Starbucks’ bullshit doesn’t count), feel free to tell me what it tastes like.

Another decently well known drink from the series is Butterbeer (pictured above), which looks just like someone poured a lot of toffee into a glass… which I want now. But what exactly is “Butterbeer”? It’s a slightly alcoholic beverage that our heroes drink while visiting Hogsmeade, a small town not too far from Hogwarts. As you could probably guess from the name, there is butter in this drink. Then, depending on what recipe you go by you get a whole bunch of different ingredients you could use. So just look it up if you want to try it out.

There are a couple more beverages within the universe, but those are the main ones I wanted to talk about.

As with our normal world, the magical world that Harry gets to be part of is filled with all kinds of awesome candy. From normal ones that just taste sweet, to ones that do weird shit, there’s something for everybody. So let’s talk about a couple.

Let’s talk about the chocolate frog, one of the first candies to pop up in the movies. Basically it’s a magic frog made out of chocolate. Though you gotta be fast, because these sons of bitches can jump away from you if you’re not careful. Except if you buy it at Warner Bros studios, because then it’s only a thick lump of chocolate vaguely shaped like a frog. This I know because I went there back in 2013 (London version of it) and my friend bought one. And hey, if it jumps away from you then you’ll at least still get a cool trading card.

“How does this thing work? Darn kids, and their bloody technology”

So yeah, those things are pretty damn cool. Chocolate AND a trading card? Yes please!

The next thing on the candy list are the infamous Bertie Bott’s Every Flavor Beans. And they’re jelly beans with all kinds of kooky flavors. You might be lucky to get a watermelon or lemon or something yummy, or you could end up getting soap or a dirty sock. Or in Dumbledore’s case:

I brought up watermelon and soap because in that aforementioned Warner Bros studios visit, my friend not only bought a chocolate frog, but also a box of Bertie Bott’s Beans, and he let me try a couple. First I took a green, and got watermelon (awesome). Then I tried a white and I got soap (bleh). So yeah, eclectic bunch of beans, they are. Do feel free to try them at some point, they’re a lot of fun. There are also beans that make you do animal noises… not on the WB tour, but in the movies (as demonstrated in “The Prisoner of Azkaban”).

As for other types of candy, there’s liquorice, bubble gum, lollipops, other chocolate things… most types of candy there are like our normal things, but with som kooky “magic” twist. Still, candy is candy, and candy is great. Except for liquorice, to hell with that stuff.

That’s really all the food stuff from “Harry Potter” worth talking about. Though there was a mention of pea soup being able to kill you in one of the movies… eh, who cares. Anyway, this has been a lot of fun. Again, huge thanks to Ruth and Kristina for letting me join in on this, always happy to take part in your shenanigans, ladies!
Have a good one, and to end on a high note:

7 thoughts on “The Food in Film Blogathon: Harry Potter and the Tasty Foods”