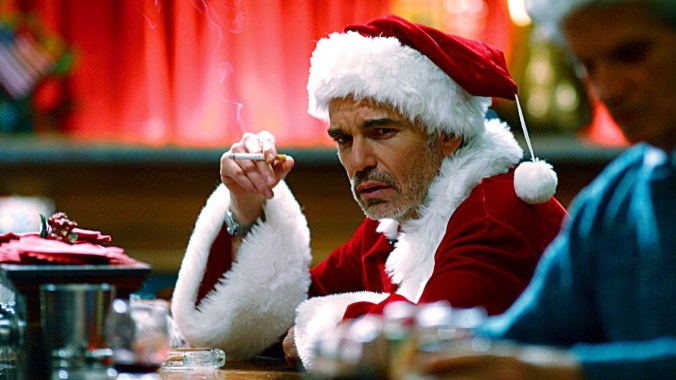 Ho ho holy shit, it’s the fourth fuckin’ part of this god damn series of mine. So let’s get into it.

Are you a bit of a Grinch? Need something with a little less holiday cheer than most other christmas movies? Then “Bad Santa” is for you. Willie (Billy Bob Thornton) is a drunk, foul-mouthed, horny mall Santa who only does the job so he can pull off a heist at the mall with his partner Marcus (Tony Cox). And one year during their routine heist planning, Willie “befriends” a kid (Brett Kelly), and that complicates things a bit. As you probably gathered from the introduction, this isn’t exactly your typical holiday movie. The main character is a miserable drunkard who steals shit… at christmas time! And for those of us who get a bit tired of the usual “Lalala, christmas and magic and happiness”, it is a perfect thing to mix it up a bit. Billy Bob Thornton is fantastic as Willie, the titular naughty Claus. He gets the foul-mouthed, drunk, pervert character across flawlessly and it makes for something quite unique for a christmas movi. Tony Cox as his partner Marcus is terrific. They play off of each other very well. Brett Kelly is great as this innocent, naive, slightly stupid kid, and his relationship with Willie is a blast to watch. Then we have Lauren Graham as a woman that Willie forms a bit of a relationship with, and there’s something inherently funny about Lorelai Gilmore having a bit fetish for Santa Claus. Then we have the scenes featuring John Ritter and Bernie Mac, both gone way too soon. Seeing these polar opposite characters have a conversation is fucking hilarious and probably the highlights of the movie for me. I seriously miss them both, rest in peace, you awesome people. “Bad Santa” is an incredibly mean-spirited christmas comedy that I highly recommend to every person out there. Grinch, christmas lover? Doesn’t matter! “Bad Santa” is awesome.

What do you think about “Bad Santa”? Do you think we need more cynical holiday movies in our lives? Leave any and all thoughts in the comments, I’d love to know what you think.
Have a good one.