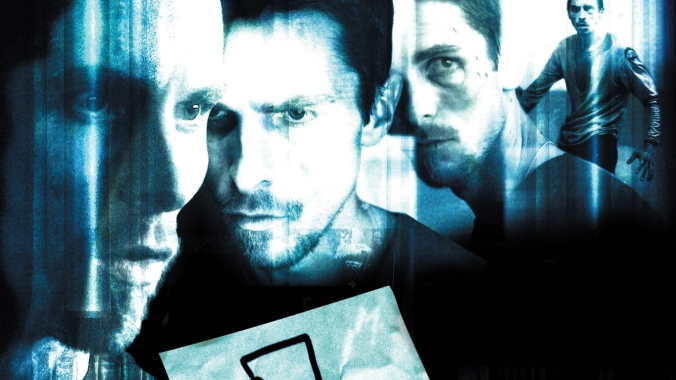 Christian Bale, you crazy motherfucker. Lose weight, gain weight, skinny, muscular, skinny, fat… all that change can’t be good for the health. It’s impressive, but it also has me worried.

Ladies and gentlemen… “The Machinist”.

Trevor Reznik (Christian Bale) is an industrial worker who hasn’t been able to sleep for an entire year. And his life soon takes a disturbing turn for the worse, when he starts suspecting that someone is trying to fuck with his life. So now we have our thriller. And I thought the plot here was really good. It had a very weird, dreamlike atmosphere that I haven’t experienced many times before. And it gives the plot a decent layer of suspense. And the mystery surrounding Trevor and what’s happening to him is really layered, intriguing, engaging, and at times even disturbing.

The characters in this are layered and interesting. First and foremost we have Christian Bale as Trevor Reznik, insomniac industrial worker. He’s interesting to follow as the paranoia that surrounds him suspecting… well, everything makes him twitchy, and potentially a bit of an unreliable narrator, which I always enjoy seeing in movies. He’s deep, layered, and a fascinating character to study. And Bale is fantastic in the role. Yes, even if you look past the weight loss. And we get some supporting performances from people like Jennifer Jason Leigh, John Sharian, Michael Ironside, Aitana Sánchez-Gijón, Lawrence Gilliard Jr, Reg E. Cathey (R.I.P), and more, all doing very well in their respective roles.

The score for the movie was composed by Roque Baños, and it was great. It has an eerie, dreamlike quality to it that fits very well with the story of the movie. It also helps to just elevate a lot of the drama and suspense here. It also reminds me of “The X-Files” at a couple of points, which is never a bad thing.

The movie was directed by Brad Anderson and I think he did a great job. His direction is very tight and claustrophobic, which adds to the paranoia of the entire situation. It manages to make it feel a bit more tense and unpredictable, which never hurts in a movie like this. What also helps with this is the cinematography by Xavi Giménez, which both captures all those things I mentioned before, and overall looks fucking fantastic.

This movie has been pretty well received. On Rotten Tomatoes it has a 77% positive rating and a “Fresh” certification. On Metacritic it has a score of 61/100. Roger Ebert gave it 3/4 stars. And on imdb.com it has a score of 7,7/10.

My review of “The Machinist” is now completed.

Not a lot of movies these days where you can hear the “ominous clarinet”.