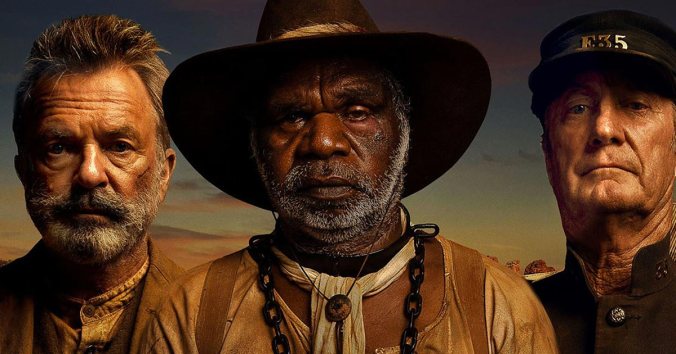 Australia. Beautiful scenery, deliverer of my favorite band, origin of so many great actors… there’s a lot to appreciate, but there’s also things that one won’t appreciate. Like snakes… and spiders… and the fact that not even the country at the end of the world has been free of racism. Oh well, let’s go down and under and back in time a bit.

Australia, the 1920s. We follow an Aboriginal farmhand (Hamilton Morris) who has to go on the run after he shoots a white man in self defense. So now we have our historical Aussie western. And I thought the plot here was good. It has an interesting premise, the events unfolding are somewhat engaging, and the entire story is pretty well told. It gives an interesting glimpse into what it was like in the outback during those times… but despite all this, it never really grabbed me. It was interesting enough for me to follow along, but there was never any point where the story had me in its grasp. I don’t know how to properly explain it. Yes, the story is good, but it’s not one of those that really dug itself into my mind.

The characters in this are decent, not ones I’ll be remembering, but they worked well enough in the movie. Explaining their arcs like I usually do is hard as to not get into some spoilers, so I’ll just skip that and list the actors (who are all really good). Hamilton Morris, Bryan Brown, Tremayne Doolan, Sam Neill Ewen Leslie, Matt Day, and many more.

The score was composed by… no one? Yeah, there’s no music here except for the end credits and like one really high pitched note at one point. But other than those… no music. Hmm…

The movie was shot and directed by Warwick Thornton, and I think he did a really good job with it. He has a way of keeping you engaged through his tight and often kinda tense directing, while also giving us some great shots of the Australian outback. It’s well shot and well directed. Not much else that can be said on that front.

While “Sweet Country” didn’t enamor me like it has the critics, I still think it’s an incredibly well made historical western-drama. It has a good plot, okay characters, great performances, no music(?), and great directing/cinematography. Though as previously mentioned, despite the plot in itself being really good, I wasn’t that engaged by it. Time for my final score. *Ahem*. My final score for “Sweet Country” is an 8,51/10. So while flawed, I’d say that it’s worth buying.

My review of “Sweet Country” is now completed.