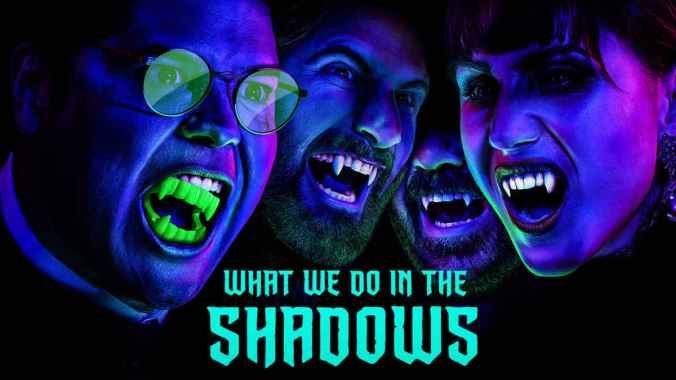 Once upon a time, some very creative and funny people from New Zealand made a gut-bustingly hilarious movie called “What We Do in the Shadows”. Several years later, they take the opportunity to adapt it for television. And now that the first season of said show has come to an end, we can talk about it.

Ladies and gentlemen… “What We Do in the Shadows” season 1!

The story follows a group of vampires (Kayvan Novak, Matt Berry, Natasia Demetriou, Mark Proksch) who all live together in a house on Staten Island, as they get into various misadventures while they’re just trying to live their lives. And I have to say, I really enjoyed following the stuff that happened here. It retains the overall tone of the movie, without feeling like a rehash of the kind of stuff that happened there. The show takes the general idea of the movie, but carves its own, silly path. And It’s a ton of fun to follow.

The characters in this are colorful, unique, charming, and really entertaining. The four people playing the vampires, Kayvan Novak, Matt Berry, Natasia Demetriou, and Mark Proksch all bring something really fun with their performances. Combine that with the stellar writing for each and every one of them, and you get some absolutely delightful characters that I couldn’t get enough of. Then we also have Harvey Guillén as Guillermo, the familiar (fancy word for servant) of one of the vampires. It’s kind of fun to see his dynamic with the crew, as he’s the only human of the group, which makes for some really fun times. And Guillén does a good job in the role. There are other actors showing up throughout the show as well, and they all do well in their respective roles too.

There isn’t a whole lot of music in the show, but when there is, it’s pretty good. The score itself was composed by Mark Mothersbaugh, and when it shows up, it’s alright. Not exactly memorable, but it works. The occasional licensed track exists too, and they work fine.

Based on the 2014 movie of the same name by Taika Waititi and Jemaine Clement, the show was created by Clement, and written/directed by him, Waititi, and various other cool people. And their work on that front is really solid. The show of course keeps the documentary-style direction of the movie, and it just adds to the surrealness of it all. The writing in itself is fucking hilarious, but I feel like the mockumentary style adds another dimension to it that somehow makes it even funnier. So yeah, I laughed, a lot. This is one of the funniest show I’ve watched in recent years.

Season 1 of “What We Do in the Shadows” took my already positive expectation and somehow blew them out of the water. It has a fun plot, great characters, great performances, okay music, great directing, and hilarious comedy. Time for my final score. *Ahem*. My final score for “What We Do in the Shadows” season 1 a 9,89/10. Which means it gets the “SEAL OF APPROVAL!”.

My review of “What We Do in the Shadows” season 1 is now completed.