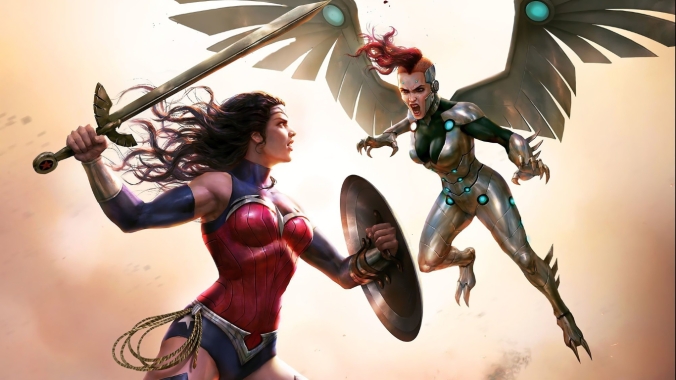 Sorry for the lack of posts so far this month. Been hit with a weird case of apathy. But hopefully will get back on track soon enough. So to try to get things back into gear, let’s go into one of my most talked about subjects here on the blog: DC animated movies.

Wonder Woman (Rosario Dawson) has to face her toughest challenge yet when several of her villains team up to pull off an evil, potentially world-threatening scheme. All the while a young woman she saw grow up (Marie Avgeropoulos) starts turning towards the dark side. So now we have our big, sweeping tale of heroism and family drama and I’m being totally facetious, this plot holds together like wet cardboard and paper glue. There are decent ideas here that could make for a solid superhero plot… but the way it’s stitched together doesn’t quite work. Allegedly emotional moments get a disinterested/sarcastic “Oh no, not that person” from me. So yeah, unfortunately I didn’t find the plot that engaging, which is sad, because there are decent ideas presented throughout.

The characters in this, like with the plot, have good ideas to them, but in execution just end up… meh. The one that I probably cared about most was the titular princess of Themyscira. She’s kind, she’s tough, she’s… Wonder Woman. And Rosario Dawson gives it her all in voicing her. Then we have Jeffrey Donovan playing Steve Trevor, sidekick and love interest. He’s all quips, all the time. I like quips… but it doesn’t quite work here, because there’s nothing else there, no other trait than “Spew quip”. Which means Donovan doesn’t have much to work with. The other actors in the movie, including Marie Avgeropoulos, Kimberly Brooks, Michael Dorn, Courtenay Taylor, Adrienne C. Moore, and a bunch of other people, they all give good performances… even if the writing leaves a bit to be desired.

As with a lot of other DC animated movies, the score for “Wonder Woman: Bloodlines” was composed by Frederik Wiedmann, and as per usual, it is great. Big and epic, somber and emotional, mysterious and intriguing, his score captures all the emotions and such one would require from a big superhero adventure… however, a great score does not a great movie make.

Based on the iconic DC Comics character created by William Moulton Marston, “Wonder Woman: Bloodlines” was directed by Sam Liu and Justin Copeland. And this teamup isn’t great. Look, the animation itself is really frickin’ good, highly detailed and really fluid. But as with the plot and characters, something feels a bit off. The action isn’t as well crafted as some other DC animated efforts, and there’s something weirdly bland about shot composition in most scenes. Such a mixed bag in this department.

This movie has gotten some mixed reception. On Rotten Tomatoes it has an 88% positive rating. And on imdb.com it has a score of 5,8/10.

I wanted to love this… but unfortunately I didn’t. It has a not good plot, meh characters, good performances, great music, and meh direction. Time for my final score. *Ahem*. My final score for “Wonder Woman: Bloodlines” is a 4,50/10. So unfortunately I have to say that I’d recommend skipping this.

My review of “Wonder Woman: Bloodlines” is now completed.

When I envisioned my return to the blog, I thought it’d be something grand and joyous… but now I’m just sad.