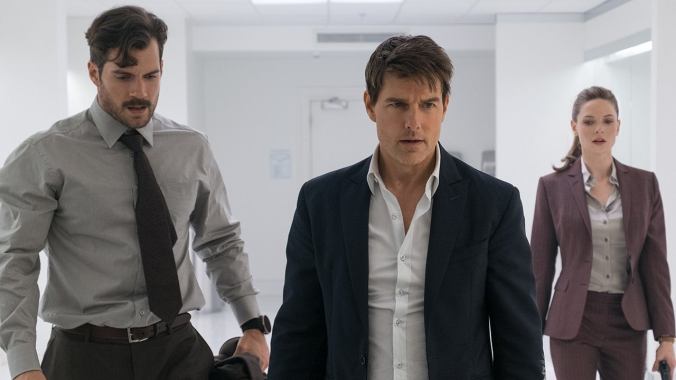 Good evening, ladies and gents. Christmas is almost upon us, and we are counting down towards that. Your mission, should you choose to accept it, is to read today’s post and hopefully tolerate the contrivance I give for choosing to talk about this movie today. This message would self destruct in five seconds, but we couldn’t figure out how to burn out your device, so when you’re done, just exit the post really abruptly like it’s destroying itself.

“Mission Impossible: Fallout”. The sixth entry in the film franchise based on the old tv show, was written and directed by Christopher McQuarrie, and once again starring stunt-performing madman Tom Cruise as he and his team has to stop some nuclear devices from being unleashed upon the world. It was released in the summer of 2018, to critical and commercial acclaim. You all probably think that I’m using the same excuse as with “Sunshine” yesterday, where it’s all about “If the world isn’t saved, then there’ll be no more christmas”. And you’d be partially right… but I’m not just rehashing old explanations/contrivances. I got something new too.

In this movie, Tom Cruise has to go across the world to stop this nuclear threat from an evil shadow organization. So it’s a globetrotting adventure. And at a point in the movie, we also see good ol’ Tommy boy run across some rooftops. So he sprints across rooftops, while traveling the world. You know who else does that? Santa Claus. Or should I say… SANTA CRUISE!?

So there, Tom Cruise, much like Santa Claus, hops around rooftops all over the world. And even if we discount this clear holiday implication, “Mission Impossible: Fallout” is still an absolutely fantastic action movie that, in my opinion, gets better with every watch. Great chases, great fights, some great shooty-bang-bang, some great acting… it’s just great.