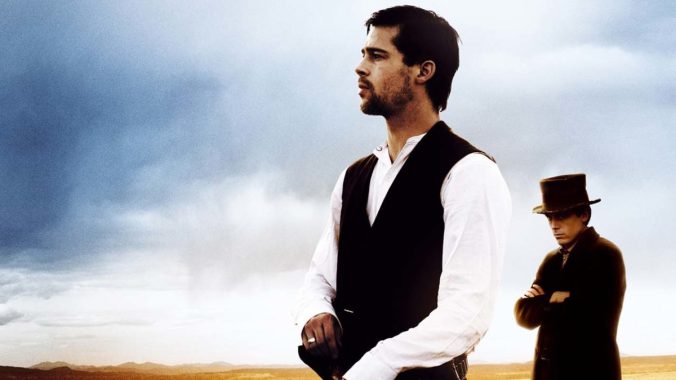 That’s right, this series is still going. I am not giving up on it, even remembering to do a post each day is a surprisingly stressful act. Anyway, here’s today’s post.

Based on a book by Ron Hansen, “The Assassination of Jesse James by the Coward Robert Ford” was released in 2007, and directed by Andrew Dominik. It follows a young man named Robert Ford (Casey Affleck) who has idolized legendary American outlaw Jesse James (Brad Pitt) for many years, and then finally gets the chance to join his gang at the age of 19. The movie is a character-driven psychological drama all about demythologizing Jesse James while also deconstructing its central protagonist, Robert Ford. So now you’re probably wondering how I’m gonna contrive this to be a christmas movie? Well, watch and learn, my friends. This is how the pros (read: idiots) do it.

Now, one or two of you might assume I’m gonna use the scenes set in snowy landscapes for this. Well, as I’ve probably established earlier in this series, I’m not that fucking shallow. That’s not contrived enough. No, I got something else.
What we see in the movie after Bob joins Jesse’s gang is how much he notices what a psychotic, paranoid disappointment Jesse actually might’ve been, and not this awesome cowboy legend you might read about and enjoy following in a dime novel. So one of the basic messages one can sort of get out of this movie is “Don’t meet your heroes, because you’re just gonna be disappointed”. And that works as our christmas analogy, because as a kid you might be celebrating the holiday with your family, both immediate and extended. And all of a sudden Santa Claus shows up, lets kids sit on his lap, and give them presents. But then one of your dumbass cousins decides to tug at Santa’s beard and find out that it’s just your uncle in a cheap costume, and it turns out there is no actual magical lobster man. Bob getting to know Jesse is kind of the same thing. Instead of this magically awesome being he thought he knew, it turned out to be something a bit more disappointing. So “The Assassination of Jesse James” is a christmas movie in the sense that the truth about the legend is a fucking disappointment, just like Santa Claus.

The movie on the other hand isn’t a disappointment, it’s fucking fantastic. One of my favorites.