Yes, I finally got the opportunity to catch up. If you’ve been following my blog for a while, you’d know that I’m a big fan of this show. I’ve reviewed every season (*not so subtle nod*), and I’ve loved each and every one of them. So now we got the question: Does the latest outing land on that list, or is it somehow a big pile of disappointment? Let’s have a look.

1929. Tommy Shelby (Cillian Murphy) tries to balance his life as a politician with keep tabs on his family business, all the while antagonistic forces, including fellow politician Oswald Mosley (Sam Claflin), fight against his every move. More scheming, more violence… more “Peaky Blinders”. And I’ll be up front about my thoughts, I loved the plot this season. There’s a lot going on, making episodes feel very dense, but it’s handled in such a smooth and clever way that you never get lost. The tone also feels darker and more dire than before, partly due to it being set during one of the toughest times in modern history (the depression), but partly also because it focuses so heavily on Tommy’s rapidly deteriorating mental state. There wasn’t ever really a moment in the season where it felt like I could figure out what was gonna happen next, due to clever and subversive drama that was brought to life by the spectacular writing. I was on the edge of my seat for all six episodes, and I adored every minute of it.

The characters of season 5 are just as flawed, nuanced, human, and interesting as they’ve ever been… maybe even more so, due to developments in the previous season and in this one. Seeing Tommy go so far down in the abyss this season was enrapturing, and Cillian Murphy is once again fucking amazing in the role. Arthur has possibly had the biggest arc in the entire show, and it’s interesting to see him at this point in his life, wonderfully portrayed once again by Paul Anderson. Helen McCrory is still an absolute badass as Aunt Polly. Sophie Rundle, Finn Cole, and Harry Kirton all kill it once again in their roles. Aidan Gillen was once again great as Aberama Gold. Let’s talk newcomers. First up we have Sam Claflin as Oswald Mosley, who apparently was a very real person. Now, I can’t speak to how accurate Claflin’s portrayal was to the real deal, as I am neither old nor British. I can however talk about his role in the show. He’s a level-headed, scheming, and highly intelligent conservative politician, clashing with Tommy’s ideology and work at multiple points, making him a most dangerous opponent, even without guns or violence. And Claflin is great in the role. Then we got Anya Taylor-Joy as Gina, the recent wife of Finn Cole’s character Michael. It’s not clear at first what purpose she’ll serve within the show’s dramatic developments, but soon enough you’ll find out, and she’s made an intriguing part of the cast. And Taylor-Joy does a good job in the role. The entire cast is fucking great, yo.

As with previous seasons of “Peaky Blinders”, season 5 relies on a lot of licensed music to add to its storytelling, mainly within the hard rock and blues-rock genres. When I first heard it back in the day, I was very much taken aback by it. But now it’s so ingrained in the show’s identity for me that I wouldn’t have it any other way. There are also a few tracks made for the show, brought to us by Anna Calvi, and those are good too.

Series creator Steven Knight handled writing for all the episodes, with Anthony Byrne handling direction on all six episodes, and Si Bell doing the cinematography. And the craft is the best the show has ever given us. Plenty of impressive camera movements suck us further into the character drama, with some gorgeous wide shots on occasion to make us go “Wow!”. The show’s always been impressive from a craft standpoint, but they’ve truly stepped up their game this time around.

The show/season has of course been very well received. On Rotten Tomatoes it has an 84% positive rating and a “Fresh” certification. On Metacritic it… exists. And on imdb.com it has a score of 8.8/10 and is ranked #54 on the “Top 250” tv list.

I think it comes as a surprise to absolutely fucking no one when I say that I loved season 5 of “Peaky Blinders”. It’s a darker season that kept me on the edge of my seat throughout all of it, furthering my investment in the characters. It has a great plot, fantastic characters, fantastic performances, great music, and fantastic directing/cinematography. Time for my final score. *Ahem*. My final score for “Peaky Blinders” season 5 is a 10/10 (fuck yeah). So of course it gets the “SEAL OF APPROVAL!”. 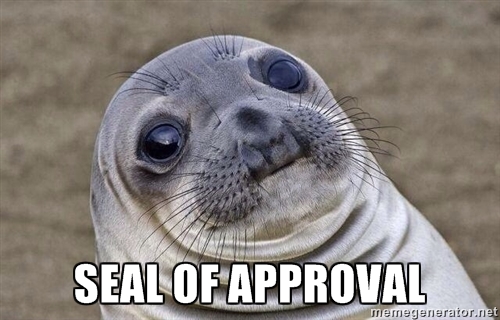 My review of “Peaky Blinders” season 5 is now completed.

If you haven’t (for whatever reason) watched this show, THEN BY ORDER OF THE PEAKY FOOKIN’ BLINDERS, YOU WILL.