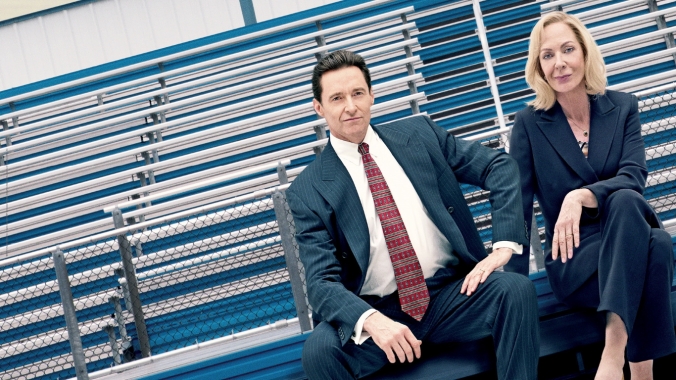 I am so thankful for HBO existing over here in Sweden. This means I got to watch this movie the day after it aired in the United States. Yes, I am bragging. Not as an insult to those who can’t watch it, but just because I’m happy over this luck I have. Anyhow, review time.

Frank Tassone (Hugh Jackman) is the superintendent of the Roslyn school district in the state of New York. He’s beloved by all, always taking time to assist colleagues and students, being a real beacon of hope and success. But as we follow him through the movie, we start to find out that he and his colleagues may have some shady, monetary dealings going on. I really enjoyed the story here, as it takes a very fly-on-the-wall approach to its storytelling. While it makes clear that some of the shady shit going on isn’t okay, it doesn’t necessarily take a side and say that anyone here is an outright bad person, instead just presenting the facts, pimples and shiny smiles alike, allowing the viewer to take their own stance on things. It also has an interesting tone, more often than not going for a more darkly comedic approach rather than straight drama, which I think really adds some extra flavor to proceedings. It’s an interesting story told in a nuanced and engaging way.

The characters are flawed, colorful, layered, and just overall quite interesting. Hugh Jackman plays Frank Tassone, the charismatic superintendent at the center of the story. He’s friendly, charming, coming off as the perfect man to lead the charge in getting a school district to the top. But as we soon find out, he may or may not have a few secrets of his own. Hugh Jackman is excellent in the role, giving a relatively subdued performance where you can read every little emotion and thought in his eyes. Next we have Allison Janney as Pam Gluckin, Frank’s colleague, and also the person who keeps tabs on the economy in the school(s). And as you might expect from that description and the fact that she’s played by Allison Janney, she’s quite an intriguing presence in the story. And Janney is great in the role. I love her chemistry with Jackman as well, they are a lot of fun together. Next we have Geraldine Viswanathan as Rachel, a student at one of the schools in Frank’s district. She’s a bright young lady, working as a journalist for the school paper. She’s one of the more interesting supporting players here as she gets plenty to do, and Viswanathan does a really good job in the role. We also get supporting work from people like Ray Romano, Rafael Casal, Annaleigh Ashford, Stephanie Kurtzuba, and more, all doing very well in their respective roles.

The score for the movie was composed by Michael Abels, and it was good. It has a bit of a classic vibe, leaning mainly on string-based arrangements, with the occasional woodwind to back it up. And I think it works well for what happens in the movie. There’s also one or two licensed songs used throughout, and they decently well too.

Based on the article “The Bad Superintendent” by Robert Kolker, “Bad Education” was written by Mike Makowsky and directed by Cory Finley. And I must say that I am impressed by that side of the movie. There’s a slickness to it all. Finley really gives scenes a nice flow, you can tell that he is in full control of the situations, giving us directing that really made the movie have an interesting and engaging vibe.

My review of “Bad Education” is now completed.

Stay in school, kids. Even if shady shit could be going on.