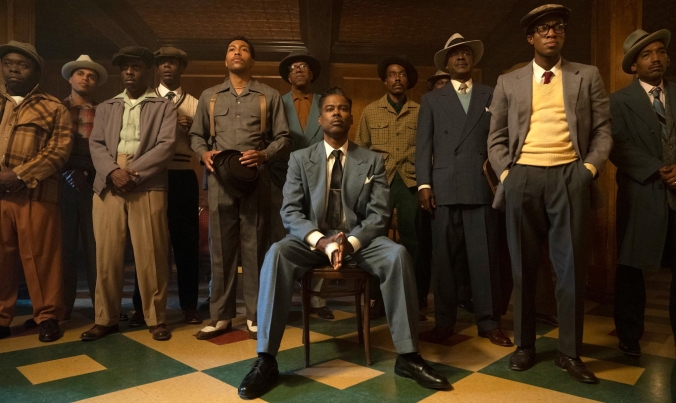 How I’ve waited for this season to drop. I am a huge fan of this show, loving every season so far. So I was of course anxiously waiting for this one to start airing. It was even supposed to air this spring, but then it got delayed. But it finally started this Autumn, and now it has wrapped up. So let’s talk about it!

Kansas City, 1950. We follow two crime syndicates, one an African-American group led by Loy Cannon (Chris Rock), and the other an Italian gangster family led by Josto Fadda (Jason Schwartzman). And as we follow their struggle against each other, a bunch of other interesting figures get involved in both their own dealings, and the antics of the syndicates. From a nurse (Jessie Buckley) with some shady secrets, to a policeman with PTSD and OCD (Jack Huston), to a devoutly Mormon U.S. marshal (Timothy Olyphant), all kinds of colorful figures occupy this season of “Fargo”. The story in this is a lot more straightforward than some of the previous ones, being less strange than some of the previous outings. But with this said, that doesn’t mean it doesn’t have a lot going on. Because this season has more threads going on than one might at first assume. And while I am more often than not interested and entertained by everything going on, I do feel like the storytelling here is the weakest of all the seasons. That said, this season has a bunch of great parts, and when this season is on top, it’s fantastic. But then there’s a fair amount of times, especially towards the middle of the season, where it loses a bit of steam for me. It does lose some of its momentum in those parts, but never enough to be considered outright bad. The overall package here is till solid.

Where the storytelling falters at points, the characters remain the best part of this show. All are colorful and nuanced and really fascinating. And the cast is fantastic too, featuring top tier work from people like Chris Rock, Jessie Buckley, Jason Schwartzman, Ben Whishaw, Timothy Olyphant, Jack Huston, Salvatore Esposito, E’myri Crutchfield, Andrew Bird, Jeremie Harris, and many more.

As with previous seasons, the score was composed by Jeff Russo, and as per usual he did a fantastic job. It’s a little eclectic in its instrumentation, creating a lot of different sounds for different scenes, and I love it, it works so well within the colorful canvas of this show. And the handful of licensed tracks used throughout work quite well too.

All episodes of “Fargo” season 4 were co-written by series creator Noah Hawley, with direction by a whole batch of cool people. And the craft here is just as stellar as before. There’s a lot of energy within the directing, crackling in a way that feels wholly unique to this show. All of it wrapped up wonderfully in some really beautiful cinematography.

While it’s my least favorite iteration of the show so far, season 4 of “Fargo” is still a damn fine season of tv. It has a good story, great characters, fantastic performances, great music, and fantastic directing/cinematography. Time for my final score. *Ahem*. My final score for “Fargo” season 4 is an 8.78/10. So while it is pretty flawed, it is still definitely worth watching.

My review of “Fargo” season 4 is now completed

Is Olyphant gonna get typecast as a marshal for the rest of his career?