Did someone say zombies?  No? Well fuck, then I guess I’ll do it… LIVING DEAD! Damn it, I messed up.

Ladies, gents, and non-binaries… “The Battery”.

The world has gone to shit (god, it’s been a long time since I last used that phrase). Zombies have taken over and humanity is spread thin over New England. And in the middle of this apocalypse are Ben and Mickey (Jeremy Gardner and Adam Cronheim), two former baseball players traveling together to try to survive. And that’s really about it, no grand goal, no major arc… just two polar opposite dudes trying not to die and trying to enjoy their new, horrifying life as best they can. And I appreciate that about this. I do of course love big stories with a lot of themes, but I found this one oddly refreshing. The relatively minimal story gives it a bit of a day-in-the-life kinda vibe that I dug. What also helps is that it never takes itself too seriously, keeping things pretty light, and even managing to be quite funny at times. And for a movie technically about corpses, it certainly has a beating heart. It does take a bit to really get going, but when it does, it becomes a really engaging story that I really fucking enjoyed.

Let’s talk about our two lead characters for a bit, because I love them. They’re opposites in most way, so for a lot of the movie they’re more or less clashing. Not in a hateful way, you can tell that they do care about each other on some level, but they’re not necessarily besties either. And what really helps sell these characters are Jeremy Gardner and Adam Cronheim, both absolutely killing it in their roles, while sharing some terrific chemistry.

The score was composed by Ryan Winford, and it was alright. It wasn’t super memorable, but it worked well enough for the various scenes it could be heard in. But then there also are a fair bit of licensed songs used throughout, and they’re all really good and help to establish the mood of the film in really wonderful ways.

“The Battery” was interestingly enough written and directed by lead actor Jeremy Gardner, and I think he did a good job with it. He clearly shows how to make the most out of having almost no budget, always finding clever workarounds for the various scenarios that he wants to show. And the cinematography by Christian Stella is really solid too, really helping maintain the film’s vibe.

This movie has been well received. On Rotten Tomatoes it has an 80% positive rating. And on imdb.com it has a score of 6.4/10.

My review of “The Battery” is now completed. 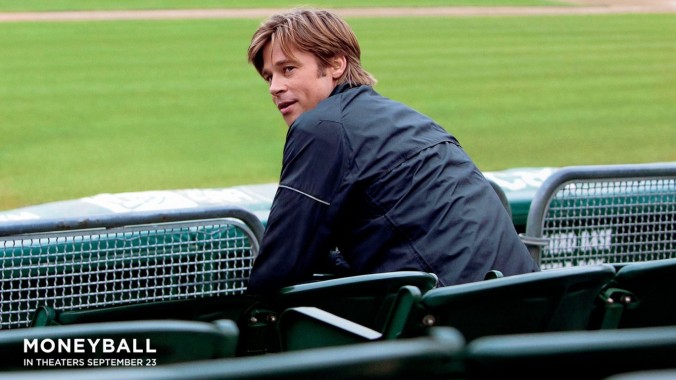 I have never really had any kind of connection to sports movies throughout my entire life. Sure, there was “Space Jam”, but that was when I was a dumb kid, But I am talking about a real and genuine connection of emotion and inspiration, a connection that feels personal. Either it’s because I have never found a sports movie that have had that type of resonance or it’s because I have pushed them out like “No, get out!”.

In “Moneyball” we have the true story of Billy Beane (Brad Pitt) who is/was the general manger of the baseball team “The Oakland A’s”. We see how he assembles a team based on computer analysis and numbers rather than the typical physical traits that talent scouts were looking for. And I was invested the whole way through and I think that might come from the really great screenplay. I can also say that I was emotionally invested in the story… yeah. Me, a lazy, sports-disliking jerk was emotionally invested in a sports movie. Now to be fair, this movie is more about what happens behind the scenes of it all rather than on the playing field itself and I like how they did it.

The characters in this movie all feel real, they all feel like they had a life before/outside the movie. Like I mentioned in my “Paranoid Park” review, those are the best kinds of characters. And the acting was really good. Brad Pitt knocked it out of the park (Pun intended) in this movie. I think I am justified in saying that he is one of my favorite actors. Jonah Hill was also great in the movie, playing the guy who helps Brad Pitt apply the math and statistics for finding the players they need. I’m not gonna lie, when I think of Jonah Hill I don’t think “Great actor”, I think “Guy with slightly bigger physique in comedies”. But still, he was great in this movie. Philip Seymour Hoffman didn’t have that much to do in the movie, but when he was on screen he was good. Also, this movie has Chris Pratt in it. I was actually surprsied to see that when I saw the movie. But everybody was great in the movie.

The score for the movie was done by Mychael Danna and I can safely say that he did an excellent job with it. It is big, it is dramatic and it is emotionally powerful. I’m not kidding, just listening to it makes me get all fuzzy and emotional inside. Yeah, it is that great.

The movie was directed by Bennett Miller who I have seen nothing from before this. I know that he directed Philip Seymour Hoffman in the movie “Capote” and I know he made last year’s “Foxcatcher” which also was a sports movie. So I can safely say that I am looking forward to seeing those movies because this movie looks fantastic. The shots look great and it all just comes together nicely. And like I said earlier, the screenplay is fantastic. It was written by Steve Zaillian who wrote “The Girl with the Dragon Tattoo” and “American Gangster”, two movies that I liked. But Zaillian wasn’t alone on screenplay duty, he was helped by Aaron Sorkin who wrote “The Social Network” which I enjoyed. In other words, this screenplay is as airtight as it can get.

This movie has been incredibly well-received. On Rotten Tomatoes it has a 95% positive rating with a “Fresh” ceritication. On Metacritic it has a score of 87/100. Roger Ebert gave it 4/4 stars. And on imdb.com it has a score of 7,6/10. The movie was also nominated for 6 Oscars in the categories of Best Picture, Best Actor (Pitt), Best Supporting Actor (Hill), Best Film Editing, Best Sound Mixing and Best Adapted Screenplay.

“Moneyball” is a sports movie that i think both fans of baseball and sports haters can enjoy. It has a solid plot, great acting, a great soundtrack, great directing and an airtight screenplay. Time for my final score. *Swings bat* Aaaaaand it’s a homerun! He runs around the field and gets an envelope of some kind! My final score for “Moneyball” is a 9,88/10. It gets the “SEAL OF APPROVAL!”.