At long last, it is here. The culmination of all the Marvel/Netflix shows. It’s a really exciting time to be alive. Four characters from four different shows (three great, one meh), coming together for one big event. Let’s get into it.

Ladies and gentlemen… “The Defenders” season 1!

When something threatens to destroy New York City, Matt Murdock (Charlie Cox), Jessica Jones (Krysten Ritter), Luke Cage (Mike Colter), and Danny Rand (Finn Jones) have to team up to try to stop this great threat. And from that we get a superhero plot filled with twists, turns, and drama. And I’d say that it’s quite the enjoyable plot. Sure, at times in certain episodes the pacing can drag a little bit, but for the most part it moves at a good pace and it’s just a fun plot to follow. Seeing these heroes we’ve come to know and (mostly) love band together to fight a common threat is just really exciting. And overall it is a solid plot, with a couple of (minor) pacing issues.

The score for the show was composed by John Paesano, the man who handled the music for “Daredevil”. And once again he has succeeded in a score that works very well for the show. It’s big, epic, cool, dramatic, and even at times beautiful. It’s just overall great. There were also a couple of licensed tracks throughout and they were used well. This show has good music.

The show was created by Douglas Petrie & Marco Ramirez, and written/directed by a whole bunch of different people (and don’t get me started on all the producers). And overall this show is quite well crafted in terms of directing and such. The show looks good and feels tight in it’s directing. The action scenes too are quite fun. They’re well choreographed, and you get a clear sense of what is going on in each action scene. It’s just fun seeing all of these guys kick some ass… even Iron Fist. One little detail that I too liked that was noticeable in transitions and the opening credits is that each character gets a specific color to represent them in those situations. I won’t go through each of them as you’ll quickly pick up on them yourself. Just thought I’d quickly mention it.

This show just came out but has so far been well received. On Rotten Tomatoes it has a 79% positive rating and a “Fresh” certification. On Metacritic it has a score of 63/100. And on imdb.com it has a score of 9,0/10. (Keep in mind, these scores can and will change over time, but I will not edit this damn post for that, all these scores are at the time of writing).

Season 1 of “The Defenders” is one hell of an entertaining show. It has a really good plot, great characters, great performances, great music, and great directing. The only flaw I have with it is that in a couple moments throughout the pacing drags a little, but it’s not too deal-breaking for me. Time for my final score. *Ahem*. My final score for “The Defenders” season 1 is a 9,32/10. While mildly flawed, you should definitely watch it!

My review of “The Defenders” season 1 is now completed.

It looks unclear right now, but let’s face it… there will be a season 2 at some point.

What the fuck is this, trailer day? *Checks to see if Comic Con is going on* Nope, no comic con… there’s jsut a bunch of trailer being released today… sweet.

So we have our first real trailer for “The Defenders”, the next Marvel/Netflix show. We’ve had two teasers before this, but none of them showing any actual footage. But here we have a good look at what’s to come. So what’s this all about then? Well, it’s about Daredevil (Charlie Cox), Jessica Jones (Krysten Ritter), Luke Cage (Mike Colter), and Iron Fist (Finn Jones) teaming up to fight some bad dudes. And it seems like the main bad guys will be Elektra (Elodie Yung) and a mysterious woman named Alexandra (Sigourney Weaver). All set to Nirvana’s “Come As You Are”. So what do I think about this? Holy shit, I am fucking excited! This looks like so much fun. Seeing these characters team up to kick some ass… YEAH! Also, it’s quite refreshing to get a fun/good trailer like this after that disappointingly bad “Dark Tower” trailer. So yeah, I am really excited about this show. All 8 episodes of “The Defenders” is set to be released on August 18th, only on Netflix.

What are your thoughts on this? Are you excited about “The Defenders”? And what’s your favorite of the four Marvel/Netflix shows that came before it? Leave any and all answers in the comments!
Have a good one and enjoy the trailer! 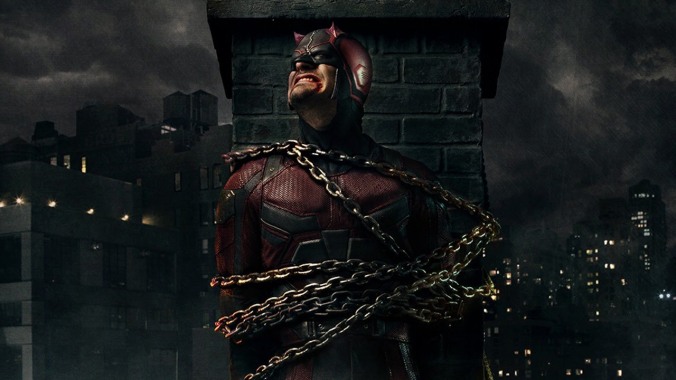 As some of you might know, I reviewed the first season of this show almost a year ago and absolutely loved it. So I was of course really excited when it was announced that the show (unsurprisingly) was getting a second season. And now it is finally here and ready to be reviewed. Just to warn you, there will be a few spoilers for season 1 in the process, but I will try to be as spoiler-free as possible, given that some of you may not have seen this season or season 1.

Matt Murdock (Charlie Cox) is back, still operating as the costumed vigilante called Daredevil (Or “The Devil of Hell’s Kitchen”, whichever you prefer). Everything seems to have calmed down after the whole Wilson Fisk (Vincent D’Onofrio from season 1) ordeal a while ago. But then shit starts to occur again when a new vigilante by the name of Frank Castle (Jon Bernthal) starts showing up and mowing down a whole buncho f street gangs. So it’s up to Daredevil to stop Castle while also dealing with his ex-girlfriend Elektra (Elodie Yung) showing up, asking for his help with some… stuff. Look, I know that having too many charcters within a plot can go south really quickly (*Cough* “Amazing Spider-Man 2” *Cough*), but I feel like they actually managed to balance it out pretty well with the two new characters. Both get a good amount of time in the story and both add a good amount of drama too it, while still not sacrificing any of the drama added between Matt and his friends Foggy (Elden Henson) and Karen (Deborah Ann Woll). The dramatic tension of it all works fine while also adding new stuff to the plot that works perfectly. Yeah… I liked it a lot.

The characters of the show are still really interesting, very well realized and perfectly integrated into this world. Charlie Cox is still fantastic as Matt Murdock, even being able to give a performance that is even better than in the first season. Elden Henson is still great as Foggy and Deborah Ann Woll as Karen gets a lot more to do and she also gets a lot more depth to her character. Now how are the new guys doing in this show? Well, Jon Bernthal is absolutely fantastic as Frank Castle/Punisher, giving a multi-layered performance that stays true to the original comic book character while also adding something new to it. And Elodie Yung is great as Elektra, a femme fatale that still shows that she’s a good character and not just a sexy/devious woman. We also get a few more great supporting characters/performances which I will not go into because you might want to experience them for yourselves…

Like in season 1, the score was composed by John Paesano who once again succeeded! The score for the show is intense, dramatic and just overall really great, perfectly fitting the show.

Who directed the show? A whole bunch of people, so I’m not even gonan mention them all here… you go look ’em up. What I at least can say here is that the show is very well directed, with the camera work being really good and the fight choreography being absolutely terrific. Seriously, there is a scene in the season that rivals the hallway fight from season 1. There are also a lot of interesting easter eggs and references to a lot of other Marvel stuff throughout the season, so keep your eyes and ears peeled.

“Daredevil” season 2 has a lot going for it. A really good plot, great acting & characters, terrific music, great directing & action and some fun little nods towards other Marvel things. Time for my final score. Jeff, gife me the damn thing before I *ahem* Punish you. My final score for “Daredevil” season 2 is a 9,96/10. It gets the “SEAL OF APPROVAL!”.

My review for the second season of “Daredevil” is now completed.