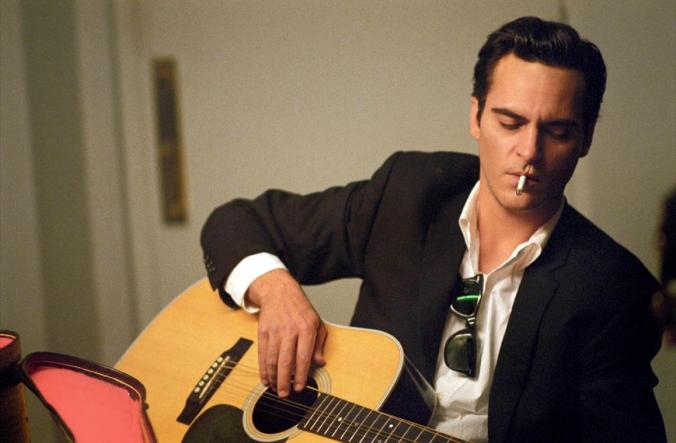 Hello there guys, and welcome back to the “Mangoldathon”! For anyone wondering what the fuck I’m talking about, 2 weeks ago I announced a series of reviews leading up to the release of “Logan” in March. Most people would logically review all of the “X-Men” movies leading up to that, but I chose to go a different direction. I opted to instead review a couple of movie directed by James Mangold, the man directing “Logan”. This started with my review of “Cop Land” two weeks ago, and continues today with… this.

Ladies and gentlemen… “Walk the Line”.

“Walk the Line” tells the story of musician Johnny Cash (Joaquin Phoenix) and his rise from simple salesman to big musician. It also follows Cash as he through many ups and downs develops a relationship with June Carter (Reese Witherspoon). And from this we get an incredibly interesting, entertaining and emotionally powerful drama. It’s not just your typical “rags-to-riches” story, though it does use a few of those elements, but it’s more a general look at a troubled man getting famous and going through some stuff. I was invested throughout the entire runtime and I do think that the plot is pretty great.

The characters here are all interesting and feel very real. Joaquin Phoenix is fantastic as Cash, playing him with so many subtle nuances that makes it endlessly fascinating to watch. Reese Witherspoon is great as June Carter, playing her in an energetic yet very grounded and real way. She’s the order to Cash’s chaos, creating a good balance. We also had Ginnifer Goodwin as Cash’s wife, and she was really good too. And we also had Robert Patrick as Cash’s dad, and he was really good too. All actors in the movie did very well to be quite honest.

The score for the movie was composed by T Bone Burnett and it was really solid. It’s not one of those scores that is meant to be noticed, but more just be in the background to help keep a certain mood in some scenes, and the stuff Burnett composed… yeah, good shit. And of course, since this is a movie about a real life musician we have to talk about how said musician’s music was done in the movie. The songs performed by Phoenix, Witherspoon, and the various other cast members in the movie were great. They all sounded very good and worked well in the movie.

This movie was (as mentioned in the beginning of the review) directed by James Mangold and he really did a fantastic job. The scenes flow very well and the camera work is absolutely gorgeous. Really, it’s a very well directed movie.

This movie has been very well received. On Rotten Tomatoes it has an 82% positive rating and a “Fresh” certification. On Metacritic it has a score of 72/100. Roger Ebert gave it 3,5/4 stars. And on imdb.com it has a score of 7,9/10. The movie won 1 Oscar in the cateogry of Best actress (Witherspoon). It was also nominated for an additional 4 Oscars in the categories of Best actor (Phoenix), Best film editing, Best costume design, and Best sound mixing.

My review of “Walk the Line” is now completed.

History is something that has always interested me. I don’t know why shit that happened a long time ago is so interesting to me… it just kinda is. And that means historical movies should interest me more than anything, right? Well that might be true in some cases. But then there are shit historical movies as well. The movie we are taking a look at now is sort of a historical movie. It isn’t really a historical movie in the sense of it following a real historical figure, but rather is set in a time period which is now considered history.

This movie follows Roman general Maximus Decimus Meridius (Russell Crowe). He is a great general who have won many battles. Why is that important? Because it is part of his character and because it plays into the story. After one battle he is betrayed by Commodus (Joaquin Phoenix), the emperor’s corrupt son. He got Maximus’ son and wife killed and got Maximus imprisoned. After a little while he gets bought by a guy and is turned into a gladiator in the great arena together with a bunch of other guys, including a black man named Juba (Djimon Hounsou). And through the movie we get to see how he goes from low ranking gladiator to what I like to refer to as “Mr. Big Cheese”. And seeing this story/journey unfold throughout the movie is pretty fucking awesome. Not only does it show the battles Maximus goes through to get higher rank, but it also shows the political intrigues brewing beneath it all… and that is to me very interesting. So yeah, the story in both idea and execution was excellent.

The characters all have different personalities and those personalities are easy to see and they are very well-written. I don’t really have too much more to say there otehr than the fact that I was very interested in the character of Maximus Decimus Meridius. I am not saying I can relate to the guy, but I am saying I really found him interesting and intriguing. Also, all characters in this movie are incredibly well-acted. The actors do a tremendous job filling the shoes (or sandals in this case) of these characters.

The music really did help sell the time period. Not only because it really had the ambience that would be needed to sell it, but also because it had some pretty epic tracks. And while I can’t list them on the top of my head I can at least say that I loved it.

Ridley Scott, you are a magnificent magnificent filmmaker! This movie looks amazing! The camera work is fantastic in both just regular scenes and action scenes. Sure, there is a little bit of shaky-cam during the action scenes but not enough that it bothered me. Ridley Scott made a very good looking movie. Also, the kid who plays a (sort of) key part in the story was not too bad either. You probably think I should have mentioned that in the “Characters/Actors” segment, but I didn’t because I felt it fit better here on “General Stuff”.

Time to see how the movie did among the movie sites and critics! On Rotten Tomatoes it has a 76% positive rating with a “Fresh” certification. On Metacritic it got the average 64/100. Roger Ebert didn’t seem to like this movie too much since he gave it 2/4 stars saying:

“It employs depression as a substitute for personality, and believes that if characters are bitter and morose enough, we won’t notice how dull they are.”

I have given my thoughts about a few things on “Gladiator”. This movie has an interesting story, great acting, fantastic music, great action scenes, interesting characters and one of the best endings in movie history. Time for the final score. My final score for “Gladiator” is a 9,62/10 which grants it the “SEAL OF APPROVAL!”

ARE YOU NOT ENTERTAINED!? 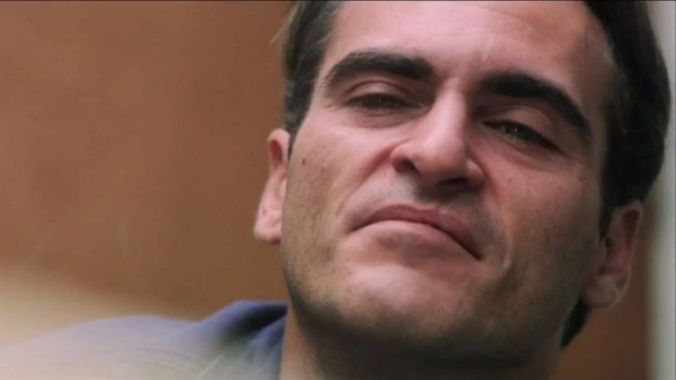 Back on the drama platform again. Some dramas get universal praise, while some get hated and some are just somewhere inbetween. And no, this is not one of the inbetween movies…at all. This is a movie that got recognized as a great movie pretty damn quick. But is it something that this guy can get behind and love as much as the critics did?

The story of the movie is set in 1950 and follows a man named Freddie Quell (Joaquin Phoenix). Freddie isn’t really a completely stable person. First he was kind of traumatized by being in war and then he ended up a bit of a drunk. One night when he is on one of his drunken escapades he ends up one a boat filled with people led by Lancaster Dodd (Philip Seymour Hoffman). Dodd is someone who the people pn the boat call “Master” (Roll credits). Basically it is like a cult or organization that Freddie ends up joining. And then he struggles to be in the organization but also having the disadvantage of having the bottle as his best friend. And that is it realyl considering how difficult it is to explain this movie without spoilers. But the premise is kind of interesting and the execution isn’t too shabby. It is just that strangely enough…the story of this movie doesn’t appeal to me. Not saying it’s bad, it just isn’t that kind of super awesome to me. It is kind of good, but not perfect.

The characters are kind of like the story…odd. Okay, I never mentioned odd in the story segment, but it is kind of odd. But the way these characters are is diffcult to say. I could say they are portrayed very realistically, but I am not sure on if what they do is realistic or not. I can at least say that the acting is really good…I mean REALLY GOOD. Joaquin Phoenix is pretty much unrecognizable as this drunken mess of a man. This guy pulls off the role perfectly! I honestly think it is one of the best performances I have seen from any actor. Philip Seymour Hoffman was also great as this leader of the organization. Still, Philip Seymour Hoffman is good in everything. But with characters/acting I was pleased.

The music is fantastic. A good mix of orchestral tracks, both bombastic and calm. Composer Jonny Greenwood did an excellent job making the soundtrack for this movie.

This movie looks better than most movies I have ever seen. Paul Thomas Anderson really shows here that he knows how the camera works and how to make a really good looking scene! Also, when I looked in the cast list for this movie I was surprised to see Swedish actress Lena Endre in there. Not saying seeing here there was a bad thing, just surprising.

The reception for “The Master” was good. On Rotten Tomatoes this movie has a 85% positive rating with a “Fresh” certification. On Metacritic it has 86/100. Roger Ebert gave it 2,5/4 stars and said this;

Paul Thomas Anderson’s “The Master” is fabulously well-acted and crafted, but when I reach for it, my hand closes on air. It has rich material and isn’t clear what it thinks about it. It has two performances of Oscar caliber, but do they connect? Its title character is transparently inspired by L. Ron Hubbard, the founder of Scientology, but it sidesteps any firm vision of the cult religion itself — or what it grew into.

I have given this movie some good words and some less good words. So now I am ready to give it my score. This movie gets my personal 8,43/10 and a recommendation to rent it. This movie has a lot of things going for it, but is still not really worth buying (In my opinion).

“The Master” is now reviewed.

While Philip Seymour Hoffman is cool, he is not as cool as the Master from Doctor Who.