I guess you could call this the second part of a review series, although I never really planned it like that. But since I now brought it up, let’s just call it a review series. A series of reviews on the “Blade” movies. And now we’re at part 2… so let’s go.

Once again we get to meet vampire hunter/Daywalker Blade (Wesley Snipes). Also, for those of you who missed the first “Blade”, I will tell you what a Daywalker is. A Daywalker is a term used to describe someone with all the strenghts of a vampire… but none of the weaknesses of a vampire. So he can walk around when the sun is out and nothing will happen to him. Now that we got that shit out of the way, let’s move on. Anyway, now Blade and his mentor/companion Whistler (Kris Kristofferson) has to team up with the vampire council to take down some kind of mutated breed of vampire called Reapers. And then the hunt is on and holy shit it’s actually kind of great. The plot doesn’t try to burden itself with a convoluted plot that tries to be more than it actually is. Instead we have a relatively straight-forward plot with a few decent twists near the end. And just because it’s simple doesn’t mean it’s completely braindead, oh no. It actually has a good sense of storytelling and it builds onto the world the first movie set up. So yeah, the plot is definitely much better than in the first movie.

The characters are all a bucket fun to watch. Wesley Snipes once again plays Blade and once again he is fucking great in the role. I really couldn’t see anyone else in the role of the Daywalker. Kris Kristofferson as Whistler is just as entertaining as in the first movie. I mean, he might be the most badass old guy since Clint Eastwood. We also get a few new additions to the roster and hot damn, this movie got a great cast. First off we have Norman Reedus (Yeah, Daryl from “The Walking Dead”) playing a young man who Blade teamed up with between the two movies. And he’s really good. Next we have Ron Perlman who plays the vampire named Reinhardt. Okay, we already know Ron Perlman is a badass, but giving him a badass name like Reinhardt is really the frosting on the cake. The entire cast is really fucking great, so let’s round ’em up. Leonor Varela, Thomas Kretschmann, Luke Goss, Matt Schulze, Danny John-Jules and Donnie Yen. Great, great cast!

Just like in “Blade” the score for this movie is heavily based in techno music which I suppose was a thing of the late 90’s to early 00’s. Not that I think it’s a bad thing as long as it’s handled well which “Blade II” does splendidly! The score is fierce, cool and overall fits the style of the movie perfectly. And all thanks to composer Marco Beltrami! Interesting also how the movie chose to add hip-hop to the mix of music as well. To be honest, I did love the inclusion of “Name of the Game” by The Crystal Method, that was awesome! So yeah, the music fits perfectly.

This is a sequel that did not have director as it’s original. The first one was directed by Stephen Norrington, while “Blade II” was directed by Guillermo Del Toro. And he did a fantastic job with how he filmed it and kept everything in check. And the action is jsut as good as in the first movie, if not even better… fuck it, the action’s better here. It is fierce, brutal and intense. And most of it is practical with the actors actually taking part in it. Sure, there was a little bit of CGI in some parts, but it wasn’t bad. Let’s talk the visual effects for a second, much better than in the first movie. First off, the makeup effects are fantastic, some of the best I’ve seen. And the CGI in the movie is a lot better than the CG in the first “Blade” which was pretty awful. The CG here on the other hand is really good which is a relief.

“Blade II” is a movie that (in my opinion) takes what was good about the first movie and improves on it significantly. The plot is much better & more enjoyable, the characters are much better & they are very well acted, the music is terrific, the directing is great, the action is fantastic and the visual effects are terrific. Time for my final score. *Slays vampire, takes envelope*. My final score for “Blade II” is a 9,85/10. It most definitely gets the “SEAL OF APPROVAL!”.

Review of “Blade II” is completed. 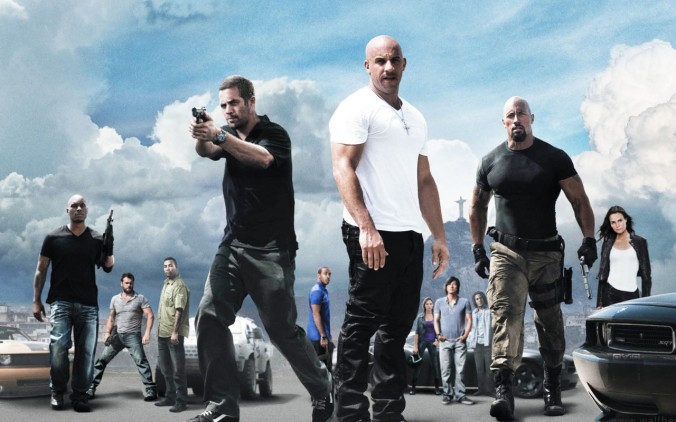 Jesus tapdancing Christ, we are already at number 5 in the series. So let’s cut the crap and get straight into the review, shall we?

So once again Dom Toretto (Vin Diesel) and Brian O’Conner (Paul Walker, R.I.P) return to cause more vehicular mayhem. But this time it is to pull the heist of a lifetime so they can buy their freedom. But they can’t do this alone! They hire a team of people who are experts in their respective fields. And this team consists of previous cast members Roman Pearce (Tyrese Gibson, oh fuck no), Tej (Ludacris), Han (Sung Kang), Gisele (Gal Gadot), Leo (Tego Calderon) and Santos (Don Omar). But at the same time they have to worry about taking down a druglord AND staying clear of federal agent Luke Hobbs (Dwayne Johnson). Before giving a verdict… how did we go from ripping off “Point Break” to ripping off “Ocean’s Eleven”? Anyway, the plot in this movie while slightly more layered than what is good for the franchise, I love the plot to the movie. While it has a few layers, it is well done and surprisingly simple. Since this movie doesn’t take itself that seriously and instead embracing the ridiculous aspects of the franchise it really helps. It knows it is stupid and it wears it like a badge… kind of like 1996’s “The Rock”.

The characters in this movie are great. They are all fun and get a good amount of space, while not feeling over/underused. Vin Diesel is still really good (if you can call it that) as Dom Toretto. And in this one Paul Walker has not really improved since the last time, but that’s not a bad thing seeing that he was pretty good in “Fast & Furious”. All other characters are great too. AND TYRESE GIBSON WASN’T ANNOYING IN THIS ONE! And of course… Dwayne “The Rock” Johnson, he is as awesome as he is in everything. I swear, you could put that guy in a movie where he is in just one room, reading the dictionary and he’d be great. And to be fair, everyone was really good in the movie.

The hip-hop music is back, fitting perfectly in how it is used. They also added a little latino pop, in lack of a better word for it. And for the third (and so far best) time Brian Tyler. And as per usual the score was great. It was intense, it was action-y and it was overall great.

This is Justin Lin’s third time directing an “F&F” movie and it is definitely the most well-directed of the three. It is smooth, it is visually great and HOLY SHIT, THE ACTION IS AWESOME! It is fast, furious, intense and badass as hell! Not just the driving scenes which are by far the best in the franchise so far, but all other action scenes too. The fights, the shootouts, the chases… they are all great. Especially if you are able to suspend your disbelief. Because this movie is so badass that it chooses to ignore the laws of physics. So you science nerds should probably not watch this movie. Thank god then that I love over-the-top stuff like this!

Looking at all major review sites, this is the most well-received of the movies so far. On Rotten Tomatoes it has a 78% positive rating with a “Fresh” certification. On Metacritic it has a score of 67/100. Roger Ebert liked this one and gave it 3/4 stars. And on imdb.com it has a score of 7,3/10.

“Fast Five” is big, loud and dumb and it wears it like a badge. With fun characters, a decent story, great music and some awesomely ridiculous action, it is a good movie. Time for my final score. *Vroom vroom* My final score for “Fast Five” is a 9,64/10. It of course gets the “SEAL OF APPROVAL!”