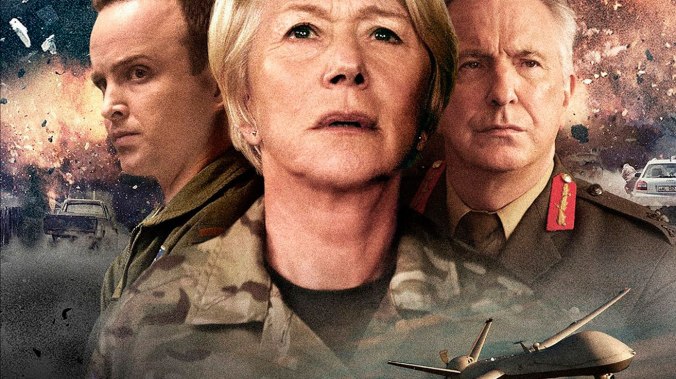 As time goes on humans are continuing to look for new and interesting ways to kill each other. One of the most interesting toys that humans have come up with is the drone. A machine flying high in the sky to fire missiles so you die. Okay, they can be used for non-lethal surveillance as well, but we all know that those things are capable of highly destructive killing.

Ladies and gentlemen… “Eye in the Sky”.

Katherine Powell (Helen Mirren) is a colonel within the UK military and she’s been tasked with leading a drone operation to take out a group of terrorists located in Kenya. However the operation runs into quite a problem when a little girl is in the so-called kill zone. This triggers a tough discussion about what should be done. Should they strike, should they not? Can they somehow minimize collateral damage? This plot was pretty fucking great. There’s a lot of layers to the plot, with the political aspects of politicians/military making a drone strike and it potentially killing a girl plus other people who might be unlucky enough to be near. But there’s not only the political angle to it, but also an overall moral dilemma for the people piloting the drone. What I also appreciated was the fact that it didn’t just go for the typical “military are heroes stopping the bad terrorists” approach, but it’s actually being more grey in it’s approach. It’s also in general really suspenseful, with the tension rising more and more throughout the entire thing. At one point it also got me a bit emotional… just thought I’d mention that. So yeah, this plot is pretty fucking great.

The characters in this were all fleshed out enough that I would not only find them pretty interesting, but I also cared about them. Helen Mirren is great, playing this woman who has to try to stay calm while also calling the shots in this difficult operation. Aaron Paul is terrific as the drone pilot, starting as just your average guy controlling a big metal thing in the sky to at one point giving us some of that emotion that he’s known for. Phoebe Fox plays Aaron Paul’s co-pilot and she’s great in the role. Alan Rickman (may he rest in peace) is great as a general that is involved in this whole ordeal. We also got Barkhad Abdi as one of the military’s allies located in Kenya, and he was really great in the role. All teh actors did really well in this movie.

The score for the movie was composed by Paul Hepker & Mark Kilian and it was great. The score was intense, dramatic, and fit the movie very well, perfectly adding to the tension/excitement of certain scenes.

This movie was directed by Gavin Hood (who also has a small role in the movie) and I would say that he did a pretty damn good job. The shots do look great, but what I love most about his direction is how taut it is. Even in moments where nothing really happens, he finds some way to make it really tense. In lesser hands this would’ve had a bunch of unnecessary action scenes so the audience won’t get “bored”, but Hood managed to hold my attention with very little. There are barely any gunshots in this war movie, but it’s still incredibly tense.

My review of “Eye in the Sky” is now completed.