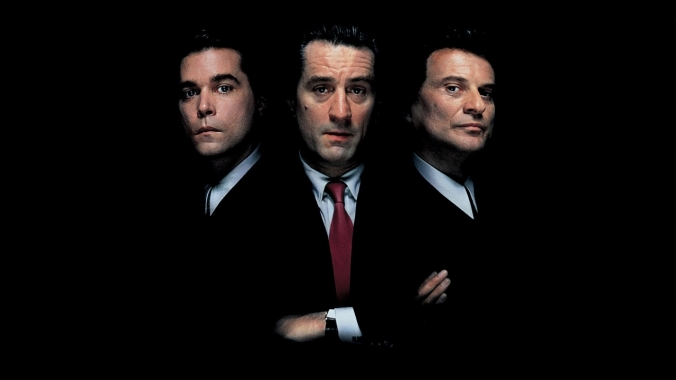 Yes, you got that right. I only now got to this “must watch” piece of cinema. Shut up.

As far back as he could remember, Henry Hill (Ray Liotta) always wanted to be a gangster *brass music plays*. And throughout the movie we follow his rise within the mob, giving us all the ups and downs. And yes, we’ve seen this kind of shit in a bunch of movies before. But I don’t think I’ve seen it done this well before. The movie is two hours and twenty minutes long, but you never feel that runtime thanks to writing that is equal parts dramatically compelling and pure entertainment value. It crackles along at a good pace, while still presenting us with situations that last with the viewers, even after the credits have rolled. It doesn’t do the slow, methodical approach that “The Godfather” used, instead opting for a more popcorn-friendly style still rises above most basic gangster stories.

The characters in this are flawed, nuanced, colorful, entertaining, and just overall really interesting. Ray Liotta plays Henry Hill, the man at the center of the story with dreams of being the next big gangster. His journey from small time crook to where he eventually ends up is quite fascinating, and he’s one of the most compelling protagonists I’ve had the pleasure of following in anything I’ve watched recently. And Liotta is great in the role. Next we have Lorraine Bracco as Karen, Henry’s wife. Seeing her journey alongside Henry is quite interesting, especially since she becomes a bit of a conflicted character that has a really interesting rapport with Henry and his story. And Bracco is great in the role. Next we have Joe Pesci as Tommy, Henry’s friend and a fellow gangster. He’s a very short-tempered guy who makes for a lot of unpredictable scenes, which is all I’ll say about him. And Pesci is great in the role. We also get supporting work from people like Robert De Niro, Paul Sorvino, Frank Sivero, Tony Darrow, and many more, all doing very well in their respective roles.

What’s interesting about the music in “Goodfellas” is that there is no typical score. No composer, no orchestra… jack shit. Instead there’s a lot of licensed music, mostly period accurate rock songs, that get used throughout to help set the mood and tell the story. And god damn it, the use of said songs here is fucking spectacular, partly because there’s a lot of music in there I genuinely like in general, but also because the director (and possibly editor) has a good fucking grasp of how to utilize a song throughout a scene.

Based on a book called “Wiseguy” by Nicholas Pileggi, the movie was co-written by Pileggi and Martin Scorsese, with Scorsese of course handling direction. And really, what else can I say that hasn’t been said before? This shit is immaculate. The blend of the writing and directing here creates a crackling energy that makes it an absolute blast to watch. Never does it feel dull. There are a few moments where it risks slipping into it, but then it picks up again, like a shot of adrenaline straight to the heart.

This movie has been very well received. On Rotten Tomatoes it has a 96% positive rating and a “Fresh” ceritifcation. On Metacritic it has a score of 89/100. And on imdb.com it has a score of 8,7/10 and is ranked #18 on the “Top 250” list. The movie won 1 Oscar in the category of Best supporting actor (Pesci). It was also nominated for an additional 5 Oscars in the categories of Best picture, Best supporting actress (Bracco), Best director, Best adapted screenplay, and Best film editing.

I don’t think I’m bringing anything new to the table when I say that “Goodfellas” is fucking rad. It has a great plot, great characters, great performances, great music, and great writing/directing. Time for my final score. *Ahem*. My final score for “Goodfellas” is a 9,88/10. So it gets the “SEAL OF APPROVAL!”.

My review of “Goodfellas” is now completed.