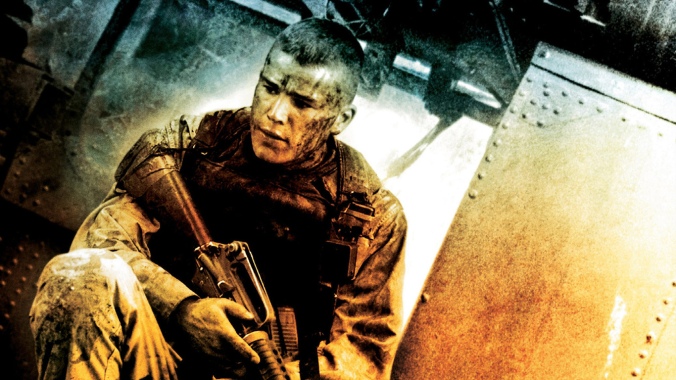 Ladies and gentlemen, we got a… “Black Hawk Down”.

In 1993, a band of American troopers were sent in Mogadishu, Somalia to try to take down a local warlord who is the cause of a civil war. However when one of their Black Hawk choppers crash in the city they have to fight for survival against essentially everyone in the city… or at least a lot of heavily-armed Somalis. And while the story doesn’t have a lot of cultural empathy, it’s still one hell of a ride. What we have here is a really intense war story and how it affects different people in this situation. And it was all very riveting. There is rarely a calm moment in this movie, so when there finally is a bit of calm you never really take it for granted. But I have to say that it was really interesting, intriguing and pretty well handled.

The characters in this movie are nothing to write home about. They are all bland and never really develop at any time. And I know that you might be sitting there like “Come on, they’re in a war, there is no time for character development”. Three words: “Saving Private Ryan”, a war movie that is just as intense but takes the time to develop it’s characters and keep them interesting. The only reason you care for the characters in this movie is because the movie makes you root for them but introducing them in the beginning and making sure you don’t completely hate them. The only one I actually still really cared about was Josh Hartnett’s characters, but that’s really only because he gets the most space out of everyone. That and his performance is pretty great. That is something positive I can say: while the characters are bland and such, the acting is still fucking phenomenal, great work by everyone in the movie.

The score for the movie was composed by the ever so masterful Hans Zimmer. It is tense, emotional, big and badass. I would really say that it perfectly fit a war movie of this size and scope while also working very well musically overall. I also like the good mix of licensed tracks in the movie because they all worked really well in my opinion.

“Black Hawk Down” was directed by Ridley Scott who I am a huge fan of and once again, he delivered. First off, the movie is masterfully shot and directed and never really has any of that terrible shaky-cam bullshit. And the action scenes are very well handled too. They are both masterfully crafted and plentiful, so anyone in need of realistic war-action, look no further. I will just say that at one point there was so much intensity going on that I thought I was gonna get a heart attack from this damn movie. Thankfully the movie felt like quieting down for a bit around that time so I could catch my breath.

This movie was well received. On Rotten Tomatoes it has a 76% positive rating and a “Fresh” ceritifcation. On Metacritic it has a score of 74/100. Roger Ebert gave it 4/4 stars. And on imdb.com it has a score of 7,7/10. The movie also won 2 Oscars in the categories of Best film editing and Best sound. It was also nominated for an additional 2 Oscars in the categories of Best director and Best cinematography.

My review of “Black Hawk Down” is now completed.

Only the dead have seen the end of war.

We all love Marvel, that is a fact. Sure, everyone got different favorites, but we all love Marvel in general. You can (for the most part) never fault them for making something horrendous that no one will like. And I also think we can all agree there has never been a proper Hulk movie. I mean, how do you make a movie about a green raging goliath but keep it interesting? Well the movies from the 70’s and 80’s are not really what we are looking for at least. And the Ang Lee directed movie from 2003 was just kinda boring (Even though the comic book based on it was amazing). But that movie did not do too well with critic and stuff, so of course people thought something in the vein of “Making a good Hulk movie is impossible… we will never get one”. Then five years later comes a new Hulk movie that gets people thinking “Hmm… maybe there’s hope after all!”. And that movie is the one we’re talking about today!

Hulks and She-Hulks… “The Incredible Hulk”!

Anyone who knows about the backstories of the biggest Marvel characters of course know the story of the Hulk. Scientist Bruce Banner (Edward Norton) tries some weird experiment on himself to find a cure for gamma radiation but it goes a bit wrong and he gets a power which turns him into a giant green rage monster whenever he gets angry (Or as this movie makes it seem; When his pulse goes over 200). He also has a loved one named Betty (Liv Tyler). So after Betty’s father the General (William Hurt) finds out about Banner and his powers, Banner runs off. And that is basically what we get from the backstory that is featured in the opening credits of this movie. But the actual movie is set after that. Bruce is in hiding in Brazil where he works at a soda factory. One day the U.S. soldiers who have been looking for him for a few years finds him, led by Emil Blonsky (Tim Roth), Bruce has to escape back to the U.S. to find help and a potential cure for his Hulk powers. And that is basically the main story(ish). And while it may not sound interesting coming from me, it is actually very well done with a few twists and a good execution. I especially like how they went with the thing of Bruce learning to kind of control his anger and heart rate with the help of meditation and breathing exercises, it gives a lot more depth to the character. I also like the whole sort of “On the run, hiding from the army who wants to weaponize my ultra dangerous powers” story. I don’t know why, but it makes the whole thing moe interesting to me. And I gotta admit, there was a part of the story which I will not spoil that I was not particularly interested in. I am just gonna say it involves one of the characters who’s name is on the poster. And no, it is not Bruce.

The characters were okay I guess. They were not bad, they just didn’t interest me that much. Sure, Bruce Banner is one of the most complex characters ever and I did enjoy him in the movie… with a little help from him being played by Edward Norton. But I didn’t feel too invested in the other characters. Sure, Emil Blonsky was pretty cool, but that was mainly because he got a fair amount of screen time and I like Tim Roth as an actor. Overall… the characters were okay.

The music… epic orchestral pieces. For the battle and chase parts, indeed. But then we had some strangely suspenseful tracks for when Bruce was trying to stay hidden and run away from the soldiers who were chasing him. So yeah, I really liked the music.

I have to admit, the camera work in this movie was pretty damn good. There were a few cool landscape shots that looked really good and the rest of the camera work was pretty good. I also have to point out that the CGI wasn’t too shabby either! There isn’t too much more to say either than there are no less than THREE cameos in this movie that were pretty cool to have. Sure, one of them was the obvious Stan Lee cameo that every Marvel movie has, but there are two more that were really cool and pretty surprising. I’ll give you a clure to one of them… the original Hulk. The other one you will see for yourselves why it is so cool.

Time for the more than average reception for “The Incredible Hulk”. On Rotten Tomatoes we have a 67% score. On Metacritic we have a score of 61/100. Roger Ebert gave this movie 2,5/4 stars. On imdb.com this movie has a score of 6,9/10.

I would honestly like to say that this movie is the optimal Hulk solo movie. I am not kidding about that, the chance of making a Hulk solo movie that is better than this is incredibly slim. So now… time for the final score! My final score for “The Incredible Hulk” is an 8,72/10 and a recommendation to buy this movie. While it is not perfect and could definitely be better it is still a movie with a good story, good performances, good special effects and Edward fucking Norton!

“The Incredible Hulk” is now reviewed.

I honestly think that Edward Norton is the best Bruce Banner ever. Sure, I really liked Mark Ruffalo in “The Avengers” as well, but I think Norton fit a little better for the character.