Hey guys, it’s me. And it’s time for me to share one of my favorite scenes. And this time it is for the sci-fi classic “Blade Runner”. In other words, spoilers for the movie “Blade Runner” and if you haven’t seen it already I suggest you go and see it (Final Cut version is the best) and then come back. We good? Great!

So this scene is pretty much at the end of the movie. Not the final scene like the video title says because there is still a little bit left after this scene, but it’s still late in the movie. And to be honest, I could include the circa 10 minutes leading up to it as well seeing as it is in my opinion one of the most suspenseful scenes of all time where we see our hero, Rick Deckard (Harrison Ford) getting chased by renegade Replicant, Roy Batty (Rutger Hauer) through an old building. But since I didn’t feel like looking for that part to include in video form, I will settle for this part… which is still worth talking about.
This movie is 33 years old and this scene still holds up magnificently both in directing and visual effects. After the chase has ended, Batty saves Deckard from falling to his death and then he starts monologuing. Usually monologuing from the movie’s main antagonist is jsut a cheap way for a deus-ex-machina to happen, but here it works. It is a beautiful monologue that gives a lot mroe meaning to everything in the movie and it is elevated by Rutger Hauer’s fantastic performance and the beautiful score by Vangelis. The scene has a lot of emotion and it is overall just fantastic, definitely one of the best I have ever seen.
Enjoy! 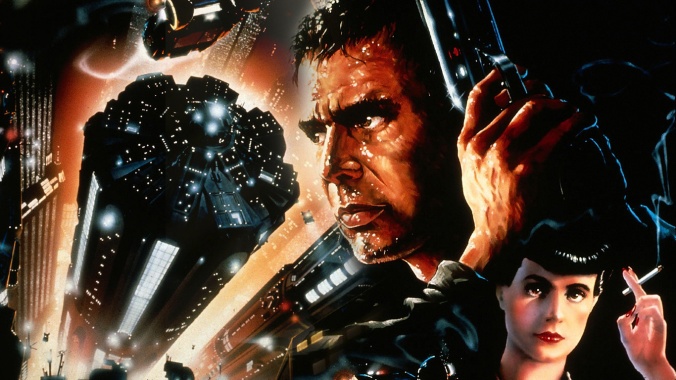 No, I am not making a series of reviews based on “different” sci-fi movies, this just happens to a coincidence. And since I couldn’t come up with a better introduction for this thing, let’s just start the review.

In the year 2019 there exist a type of robot that is basically indistinguishable from a regular human. So of course six of them have broken loose from everything else to try to find their creator. So now it’s up to the blade runner Rick Deckard (Harrison Ford) to find them and eliminate them. And while that is simple as a basic premise, we get SO much more. We get a tale of what a human really is. The plot is surprisingly more philospohical and emotionally hardhitting than you would maybe expect. And I found that really interesting. This made for an intriguing plot that tested my mind at all times. I’m not saying it is complex in the sense where it totally fucks with your mind, but it makes you really think of morality and what really makes you count as human. And for that I applaud the movie! On a quick sidenote though, I did watch the “Final Cut” version of the movie and I don’t know if the original is much different in that sense, so if you have seen it and know the difference, feel free to contact me.

The characters are all unique and interesting with distinct character traits and excellent writing. Harrison Ford is absolutely terrific in the role even though he doesn’t say THAT much. He seems to be more of an “Actions speak louder than words” guy. And Rutger Hauer the lead replicant is also excellent in the movie. Hell, the entire cast is great!

The score by Greek musician/composer Vangelis is fantastic. It is heavily based in a more electronic/techno style and really fits the neo-noir style of the movie. It is also really good at evoking emotions and helping keep scenes interesting. With music like this, you listen closely because it is excellent. I mean, it’s been called one of the greatest soundtracks of all time.

Fun fact: When this movie first came out in 1982 it was both a critical and commercial flop. Main reason was because people didn’t get what the deal with the movie was which is weird because the idea is straight forward, it’s just the philosophy in the middle of this cake we call “Blade Runner” that might be pretty complex. Now that we’ve gotten that out of the way, holy shit this world that Ridley Scott, the set designers and visual effects people have come up with is one of the best worlds ever. It is so well realized that I think it could be an actual place even though I am aware that it is a movie set. Ridley Scott did such a great job directing this movie that it kind of put his other movies to shame. And the visual effects… oh my god. Some of the best I have seen… and this came out 1982. And for the final cut version they didn’t update anything with CGI like some people out there (*cough cough* George Lucas *Cough*) and I love that! And the action in the movie is really good too.

Like I said earlier: When the movie first came out it was a critical bomb but has since then gotten quite the following and critical reception. On Rotten Tomatoes it has a 91% positive rating and a “Fresh” certification (Sidenote: It has a 100% on the “Final Cut” page). On Metacritic it has a score of 88/100. Roger Ebert gave the movie 4/4 stars and it is in his “Great Movies” list. And on imdb.com it has a score of 8,2/10 and is ranked #135 on the “Top 250” list. “Blade Runner” was also nominated for 2 Oscars in the categories of Best set decoration and Best Visual Effects.

“Blade Runner” is a surprisingly deep, thoughtful, emotionally punching, suspenseful sci-fi movies I have ever seen. It has an excellent plot, terrific characters/performances, an excellent soundtrack, great direction and some great visual effects. Time for the final score. Why the hell is it raining here? My final score for “Blade Runner” is a 9,85/10. It definitely gets the “SEAL OF APPROVAL!”

Review of “Blade Runner” is completed.

Seriously, it’s raining all the time in the movie.