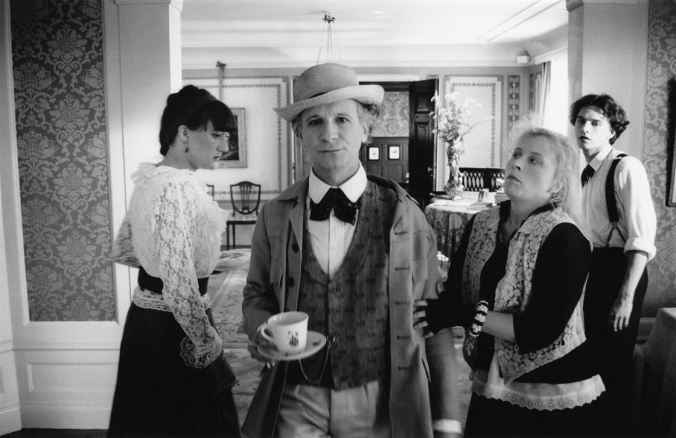 Oh hi. Ready for another Summer of the Swedes entry? Cool, let’s go!

Some fictional European country, the 1910s. A revolution rages on, and one of the country’s ministers (Etienne Glaser) has decided to have a nice, relaxing summer with his family in the countryside. He has also brought his new bodyguard (Philip Zandén). And we follow these people as they go through ups and downs throughout the summer. This film tries to say things about stuff, but it never succeeded in putting it in my head. I don’t mind a movie trying to say something about humanity or politics or whatever the fuck, but you got to have a clever way of saying it that speaks to people. This right here is just fucking pretentious and boring, seldom doing anything remotely engaging. And even in those rare moments where something that could be called mildly interesting happens, the presentation (which we’ll get deeper into later) pushes it into nonsensical pretentiousness again. And while pretentiousness can be acceptable (see Ingmar Bergman), you’re gonna need something interesting to back it up… which this tale doesn’t.

The characters try to be dramatic and engaging and interesting, but guess what… nah. They all clash, as if they’re in different movies. Take Etienne Glaser for example. He very much has the vibe of an uptight asshole in a 50s drama. But then you have Björn Kjellman who feels like he should be in a 90s rom-com. And then there’s Philip Zandén whose performance feels like what Matthew Macfadyen would end up as if he wasn’t allowed to be expressive. The actors are trying, and generally I can’t actively say anything about their performances (except for Björn Kjellman, whose performance just feels weirdly anachronistic).

What’s interesting about the music in this movie is that there isn’t much of it. And the little we get is music licensed for the film. It doesn’t have a typical score. But how do these few licensed tracks work throughout? Eh. The tracks themselves aren’t bad, but the way they’ve been implemented just feels slightly off.

Based on a novel by Ricarda Huch, “The Guardian Angel” was directed by Suzanna Osten. And I have mixed feelings about the execution of her directing. It’s clear that she knows what she wants in her direction, the confidence is very evident in what we see. However, some of the choices made don’t really work for me. There are some shots that are a bit… off. But even more baffling is the editing, which is all over the fucking place, often just leaving me stunned as to why you would make a lot of those cuts, sometimes causing a weird sense of nausea even.

On imdb.com this movie has a score of 6.6/10. That’s all I got… the movie barely fucking exists on my usual sites.

“The Guardian Angel” is a bit too slow and pretentious for me, just ending up being a drab and less than engaging experience. Its plot is slow and nonsensical, its characters not that engaging despite (mostly) good acting, weirdly chosen music, the direction okay, and the editing being fucking baffling. Time for my final score. *Ahem*. My final score for “The Guardians Angel” is a 3,11/10. So I’d recommend skipping it.

My review of “The Guardian Angel” is now completed.