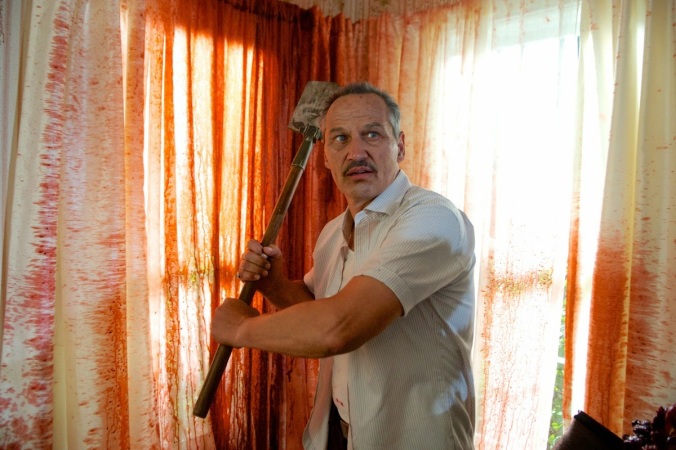 We have covered a few different horror topics here with the Month of Spooks. We have covered zombies, spooky animation, murders on an island, slashers(Thank Zoë!), and haunted houses. So I guess it’s time to move on to something different… like werewolves.

Ambrose McKinley (Nick Damici) is an old, blind, war veteran who just moved into a retirement community. But the peace is very suddenly broken when his neighbor gets killed by a werewolf. So now Ambrose has one month to prepare for the next attack from the beast. I know… this sounds really dumb. But trust me, the plot here is surprisingly well handled. What we have here is a very unusual horror movie. It’s a slow-burning drama about this lonely man, who happens to inhabit the same world as a werewolf. I was genuinely surprised at how invested I was in the plot, I really wanted to see what happened next and how this bitter, blind, man was handling everything in his life. It really is a compelling plot.

The characters in the movie are all pretty interesting. Sure, some get less time than others when it comes to screen time, but they all have some kind of purpose in the grand scheme of things. Nick Damici is pretty damn great as Ambrose, playing him as this bitter, broken, man who has a bit of a rough relationship with his son. Speaking of which, his son is played by Ethan Embry who does a really good job in the movie too. You can tell that the relationship between Damici’s and Embry’s characters isn’t the best, which adds a lot to the drama. Really helps make these characters more compelling and interesting. Then we also get some really good supporting performances from people like Lance Guest, Tom Noonan, and Tina Louise (to only mention a few).

The original score was composed by Wojciech Golczewski and I think that it was really good. It really worked in the movie, somehow enhancing a lot of the scenes it was used in. Either helping to add emotion or tension to the scene. The score is haunting and definitely helped increase the quality of the movie.

This movie was directed by Spanish director Adrián García Bogliano, and I think he did a great job directing this, making a very tightly directed movie that both builds tension and drama throughout it’s 95 minute runtime. And when shit goes down it’s fucking glorious. Brutal, tense, and badass without being overly cheesy. And the visual effects in this are really good. Sure, there are parts where the werewolf looks pretty bad. As in, distractingly bad. But then there are also bits where the werewolf looks pretty damn great. I’m at least glad that they decided to do this with mostly practical stuff. Not sure if there is any CGI in the movie, but if there is then I couldn’t really notice it. But yeah, tight direction, good effects, some shitty werewolf stuff.

“Late Phases” is one of the most unexpectedly good movies that I’ve ever seen. A character-driven horror-drama with a good plot, good characters, great acting, great music, great directing, mostly good effects, and a badass final act. Though as I said, there are some times where the werewolves look like shit to a distracting degree. Time for my final score. *HOWLING NOISE!*. My final score for “Late Phases” is a 9,01/10. While not perfect, it’s most definitely worth buying!

My review of “Late Phases” is now completed.

Big thanks to youtube channel GoodBadFlicks for introducing this movie to me. If you’re not subscribed to him already, I suggest you go do it.