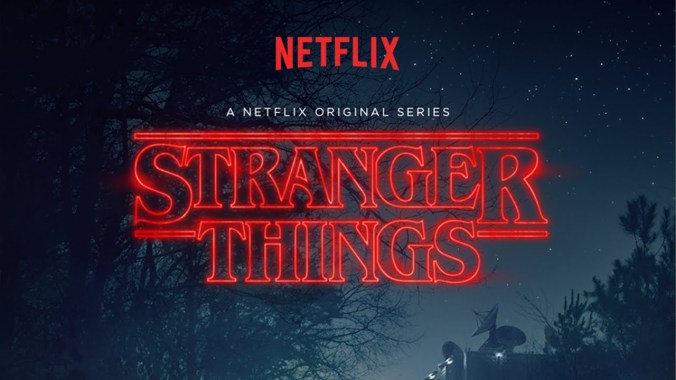 I may have been born in the late 1990’s, but I am still familiar with the 1980’s. The movies, the music, the TV shows… I know that stuff. So when that stuff is brought up in some way, I’m in. Yeah, that was the best I could come up with for the intro.

The year is 1983 and we’re in the town of Hawkins, Indiana. One late night, young Will Byers (Noah Schnapp) disappears under mysterious circumstances. So now his mother (Winona Ryder), the local police chief (David Harbour), and his best friends (Finn Wolfhard, Gaten Matarazzo, Caleb McLaughlin) have to look for him. All of this while a mysterious girl called Eleven (Millie Bobby Brown) shows up and creates even more mystery on what the hell is going on. And from that we get supernatural stuff and drama and government conspiracies and I’m not gonna say anymore about that because the plot of the show is terrific and should be experienced. The plot itself reminds me a lot of movies from 1980’s, with a lot of similar themes going on as those classic things. But the story is not just an homage to all of those classic movies and books, because it’s also a pretty original mystery with plenty of great dramatic moments, suspenseful scenes, and twisty turns. The mystery is interesting and it always kept me guessing what was going on and I just loved that. Not gonna lie, there was a moment during the last episode that actually made me tear up… It’s manly to cry, okay!

The characters in this show are great, there’s no doubt about that one. Winona Ryder is an actress I’ve been a fan of for a long time, thanks to movies like “Beetlejuice” and “Edward Scissorhands”. And she is absolutely terrific in this show, playing a mother who just wants her son back, but starts going crazy… in the eyes of the community, that is. David Harbour as Chief Jim Hopper is simply one of the greatest characters I’ve ever had the pleasure of seeing in a show. Not only does he give us some genuinely funny lines, but he has a good arc and his performance is absolutely terrific. The three central kids in the show are really good too. And not only because their performance are overall good and they happen to be likable… but because they actually act like real kids. What I mean by that is that when adults write dialog for kids, it doesn’t really fit kids, feels fake. But not here, this stuff is real, this is what kids are actually like. And then we have Millie Bobby Brown as the mysterious girl Eleven… yeah, she blew my damn mind. It’s like the acting talent of an Oscar winning actor… crammed into a 12 year old girl. And the character overall is really interesting, with plenty of backstory given throughout the season. Seriously, give a big hand to this girl for giving such a fantastic performance. We also have Matthew Modine as a strange science man in the show and he’s fine, never really blows me away in any way… but he was pretty good.

The score for the show is aboslutely fantastic! If you’ve seen any of John Carpenter’s films from the 80’s or if you’ve at least seen the sci-fi classic “Blade Runner”, then you should know what the music in this show sounds like. A lot of synths and ominous sounds and I love it, it’s so great. Thank you, Kyle Dixon and Michael Stein for creating this lovely score for the show. But it’s not just that synth-based score, we also get some 80’s songs and they are all really good too and used perfectly throughout the show.

This show was created by the Duffer brothers and it’s clear that they love the Spielberg/Carpenter films of the 1980’s. They also directed six of the eight episodes and this is a very good looking show. The camera work is terrific and the cinematography is great. I also really enjoyed the 2.00:1 aspect ratio, gave it a very interesting look. There is some CGI in this show, but not too much. And when it’s used, it looks pretty good, never blew my mind but also never insulted my eyes. I also have to say that the show at times was surprisingly scary. I am not one to be scared by movies and such easily, so the fact that the last few episodes managed to scare me was pretty impressive.

My review of “Stranger Things” season 1 is now completed.

“Mornings are for coffee and contemplation” – Chief Jim Hopper. A sentiment I agree with.