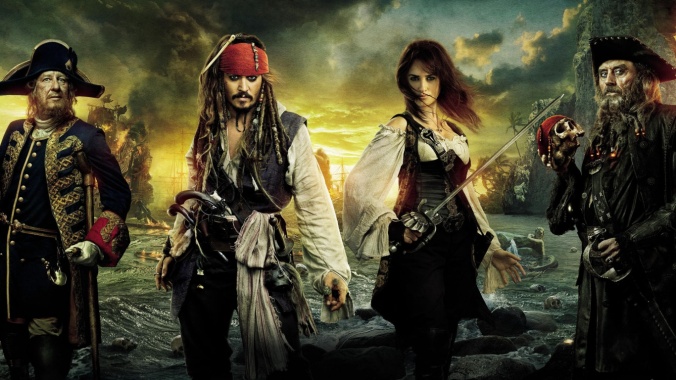 Guys, we have finally reached the end of my “Pirates of the Caribbean” review series. If you’ve somehow missed my reviews of the previous three movie then I suggest you go read them. And if you didn’t miss the reviews, I suggest you go read them anyway. Still, I’ve had fun reviewing these movies for you guys, and I hope you’ve enjoyed me reviewing them for you. Now, without further ado… let’s get into the final review.

Ladies and gentlemen… “Pirates of the Caribbean: On Stranger Tides”.

Captain Jack (Johnny Depp) is back. And after he runs into an old flame named Angelica (Penélope Cruz), he soon finds himself at the mercy of legendary pirate Edward “Blackbeard” Teach (Ian McShane). So now team Jackbeard goes on a quest to find the legendary fountain of youth. Oh, and Barbossa (Geoffrey Rush), now working for the English government, is also out to find it because why the fuck not. So now we have a more simple and straightforward narrative, at least for a “Pirates” movie. However, I never found myself invested in the story of this movie. There wasn’t any point where I found myself interested in what happened. I just followed along saying “This isn’t bad… but it isn’t great either”. I’ll give it this at least: Since this is the shortest movie in the series (around 2 hours 10 minutes, dicounting end credits), the plot never feels poorly paced. It’s not bloated like “At World’s End”, but it’s also not as interesting as “Curse of the Black Pearl”. The plot is here is just… fine.

The characters here are for the most part kind of bland, but there are a few decently interesting ones. Johnny Depp of course returns as Jack Sparrow and even though he’s still almost a parody of the OG appearance of Sparrow, he’s still good in the role. Kevin McNally returns as Gibbs and he was once again good in the role. Geoffrey Rush once again played Barbossa and he once again killed it even though he wasn’t allowed to be quite as crazy as in the previous movies. Now onto the new ones because most of the old cast seem to have disappeared. Penélope Cruz plays Angelica, an old flame of Jack’s and she’s actually a decently interesting character. She’s tough, she’s clever, and she’s just fun. And Cruz is great in the role. She and Depp even share some pretty good chemistry here, the banter between them is actually somewhat fun. Ian McShane plays Blackbeard, a menacing pirate captain who isn’t afraid to kill you if you cross him in the slightest. And McShane just kills it, he gave a commanding performance that just stole the show. Sam Claflin plays Philip, a man who strongly believes in god, and while his character is incredibly bland, Claflin does a pretty good job here. Stephen Graham plays Scrum, a man on Blackbeard’s crew, and while his character isn’t the most interesting, Graham is great in the role. Really, overall it’s a well acted movie.

Like in the previous two movies, the score for this movie was composed by Hans Zimmer and it was really good. Some tracks were the typical big, fun, “Pirates” music. But there were also some tracks where Zimmer took help from Mexican music dup Rodrigo y Gabriela, and that made for some pretty great tracks. The use of their guitars within the score was just awesome, I loved it. So overall the score here is really good and it works well for the movie.

This is the first “Pirates” movie to not be directed by Gore Verbinski. Instead it was directed by Rob Marshall and I think he did a pretty good job. The shots look fine, and scenes have an okay flow to them. What is a shame is that when Verbinski was at the helm of the series he gave us some gor(e)geous movies that were visually interesting (to say that least). Marshall on the other hand doesn’t really bring that, this movie isn’t as interesting to look at. It doesn’t look bad, it just looks… dull. Speaking of dull, the action scenes here are dull. They are okay, but nowhere near as fun and cool as in the previous movies. I’ll say this though: the visual effects here are great. I have no bigger comment about them, I just thought I’d say that they look great… moving on!

“Pirates of the Caribbean: On Stranger Tides” is an okay movie. It has an okay plot, pretty good characters, really good performances, great music, okay directing, and really good visual effects. My problems with the movie is that the plot isn’t very interesting, a lot of characters here are quite bland and uninteresting, and it’s just not very interesting to look at. Time for my final score. *Yarr*. My final score for “Pirates of the Caribbean: On Stranger Tides” is a 6,45/10. While not great, I’d still say that it might be worth a rental.

My review of “Pirates of the Caribbean: On Stranger Tides” is now completed.

There, my “Pirates” review series is over. Thanks for reading and thanks for interacting. Have a good one.

2 thoughts on “Movie Review: Pirates of the Caribbean: On Stranger Tides (2011)”